Vegetable and fruit prices have soared in markets across Pakistan as devastating rains ruin crops and disrupt supplies, an early sign of how the worst floods in decades are creating food shortages at a time of financial crisis.

Pakistan's 220 million people are already facing rampant inflation, with consumer prices up 24.9% year-on-year in July. The economy is in turmoil, with fast-depleting foreign reserves and a record depreciation of the rupee against the US dollar.

That leaves the country particularly vulnerable as it counts the cost of extreme monsoon rains through August that have killed more than 1 100 people.

Damage to homes and infrastructure will run into billions of dollars, while losses in the key farming sector have yet to be fully assessed.

In the eastern city of Lahore, close to the border with India and far from the worst floods in Sindh province, prices of some vegetables have tripled.

"Last week, I sold onions for 90 rupees a kg and today the government price is 300 per kg," said vegetable seller Ahmad Ali. The Pakistani government sets prices for some fresh produce, although traders often ignore the guidelines. 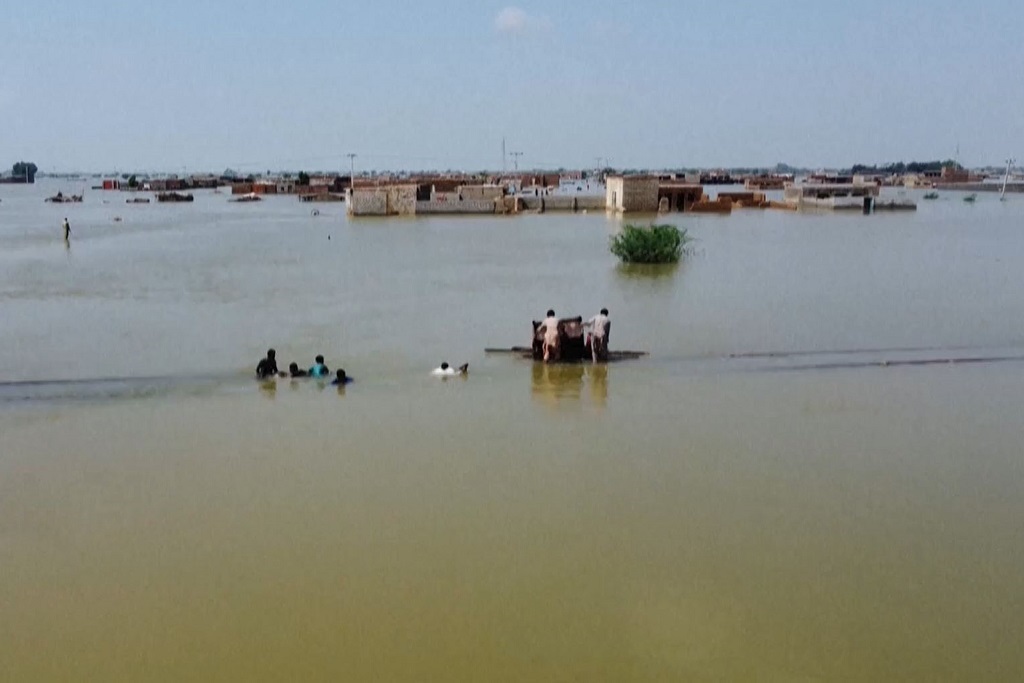 Millions in Pakistan have been affected by floods.
AFP AFP

Tomatoes and onions are among the most common ingredients in Pakistani cooking, and tens of thousands of tonnes of each are consumed each month.

"The supply of vegetables and fruit to Lahore is getting lower day by day because of the flood, rains and destruction to roads," said Malik Salim Awan, a supplier at Lahore's fruit and vegetable market.

"Before the current scenario, we were receiving over 100 trucks (of fresh produce) daily. Now, we receive 10 to 15 trucks only," Awan said.

Officials say that more than two million acres (or 809 371 hectares) of agricultural land have been flooded, destroying most standing crops and preventing farmers from sowing new ones.

Hundreds of kilometres (miles) from Lahore, people must clear up flooded homes at the same time as worry about where the next meal will come from.

"Tomatoes were 60 rupees (~R13) a kg, and now they are more than 200 ... even the price of flour is double now," said Sain Bukash Husain, 20, whose home in the village of Garhi Yasin in the southern province of Sindh has been badly damaged.

Sindh, with a population of 50 million, has been hardest hit, with 697 mm of rain thus far in the monsoon period, or 466% above the 30-year monsoon average. Pakistan as a whole has seen nearly 190% more rain than the 30-year average.

In Dera Ismail Khan, in central Pakistan along the Indus River, warehouses storing vegetables are already emptying out.

The government of Prime Minister Shehbaz Sharif is scrambling to secure supplies.

"The rice crop has been washed away," Sharif told reporters after visiting northern Pakistan. "Fruit and vegetables are gone." He said flood waters had swept away 700 000 livestock.

Pakistan's agrarian sector powers the economy and feeds the people, accounting for more than a fifth of the country's output, employing up to 40% of the workforce and producing goods worth around $80 billion annually.

Commerce Minister Naveed Qamar said on Wednesday that the government was close to an agreement to import vegetables and other edible goods from Iran and Afghanistan, and an urgent request had gone to the cabinet to approve it.

We live in a world where facts and fiction get blurred
In times of uncertainty you need journalism you can trust. For 14 free days, you can have access to a world of in-depth analyses, investigative journalism, top opinions and a range of features. Journalism strengthens democracy. Invest in the future today. Thereafter you will be billed R75 per month. You can cancel anytime and if you cancel within 14 days you won't be billed.
Subscribe to News24
Next on Business
Greenpeace activists occupy vessel carrying Shell oil platform