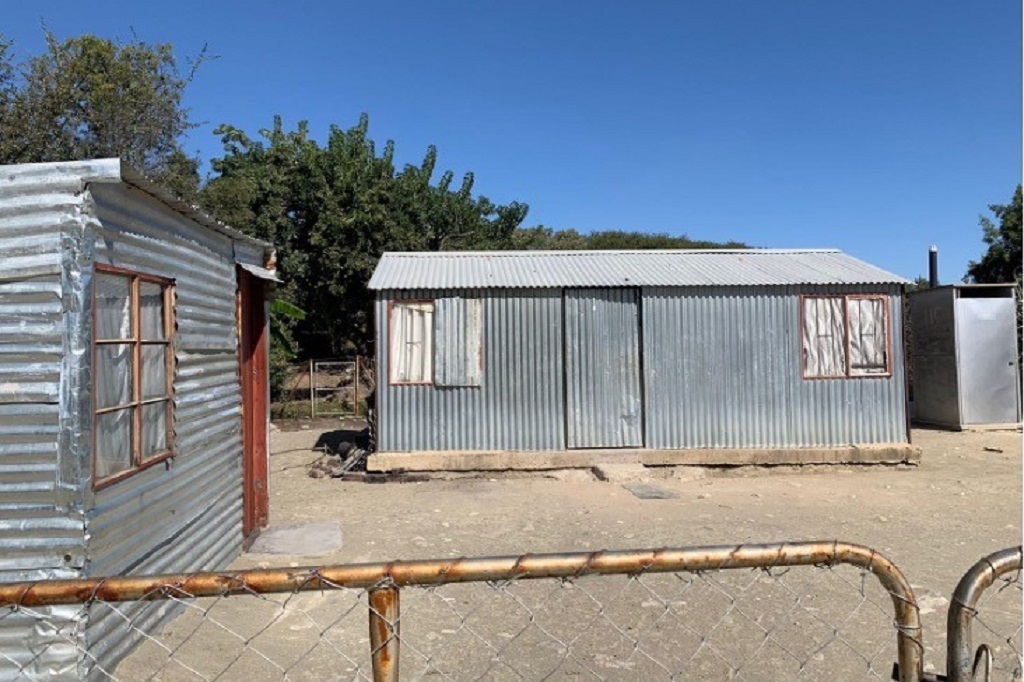 A house in Mmadithlokwa built by Tharisa mine for a family who were relocated due to the mine's expansion.
Danjelle Midgley
Shockwaves from mine blasting have a significant impact on neighbouring communities, both physical and psychological, writes Danjelle Midgley.

When residents of Mmadithlokwa, near Marikana in the North West, have mobile data, they record their experiences of mine blasting explosions from the nearby Tharisa mine on WhatsApp groups.

A sample of the messages posted by residents, who are members of the Mine Host Communities in Crisis Network (MHCCN) and other community organisations, reveals the distress caused by the noise and dust of the explosions.

Here's an example of the kind of messages posted to such groups over a two-month period: A blasting notice provided to community members by the mine on the day of the blast. Sometimes the community is informed about the mine's blasting operations through notices. Sometimes the only warning is the loud siren immediately before the blast, warning that certain families must evacuate their homes. Sometimes there is no warning.
GroundUp Christinah Mdau

Mines use explosives to blast apart solid rock or ore into smaller fragments for processing. Mine blasting causes ground and air vibration shockwaves. These shockwaves have a significant impact on neighbouring communities, both physical and psychological.

The impact is not only seen in Mmadithlokwa, but also in the hundreds of other places in South Africa where mines use blasting. Texts and videos show plumes of dust and chemical fumes rising into the air above people's houses. Voice notes describe cracked houses shaking in the blast tremors and the sour taste left by fumes in people's throats after nearby blasts.

Videos show scattered pieces of flyrock in community areas where children play and the impact of each flyrock projectile in the earth. Photos show shattered car windscreens and chicken coops strewn with freshly blasted rock pieces from the mine.

Given the serious harm of mine blasting, the Department of Mineral Resources and Energy (DMRE) and its Mine Health and Safety Inspectorate must do more to ensure proper compliance with conditions contained in blasting permits issued to mines, and work harder to meet demands by mining-affected communities for transparency and consultation.

People living close to mines using blasting want to be included in decisions, to be consulted in processes which affect them. They want to be heard and responded to when they complain about the damage to property and risks to their health and safety that mine blasting causes.

Several steps need to be taken, including:

In addition to better public participation, monitoring and enforcement, it is time that government re-examines the formal regulation of mine blasting. At present mine blasting is not well regulated in South Africa. For instance, there are no legally binding mine blast standards which provide limits for the shockwaves generated by the explosions.

Christinah Mdau, an environmental activist based in Mmadithlokwa, has witnessed the dangers of mine blasting first-hand and regularly engages with both officials from the DMRE and the mine. She believes that to truly understand the problem, mine officials must come and see the destruction caused by mine blasting with their own eyes.

By speaking out and submitting comments on draft changes to the Mine Health and Safety Act, community members and environmental justice activists, like Mdau, are appealing to the DMRE to do more to improve and enforce the laws which govern mine blasting, and protect people's constitutional right to an environment not harmful to their well-being.

Danjelle Midgley is an attorney at Centre for Environmental Rights.

We live in a world where facts and fiction get blurred
In times of uncertainty you need journalism you can trust. For 14 free days, you can have access to a world of in-depth analyses, investigative journalism, top opinions and a range of features. Journalism strengthens democracy. Invest in the future today. Thereafter you will be billed R75 per month. You can cancel anytime and if you cancel within 14 days you won't be billed.
Subscribe to News24
Next on Business
Beet that: SA's plant-based food options likely to grow in 2023