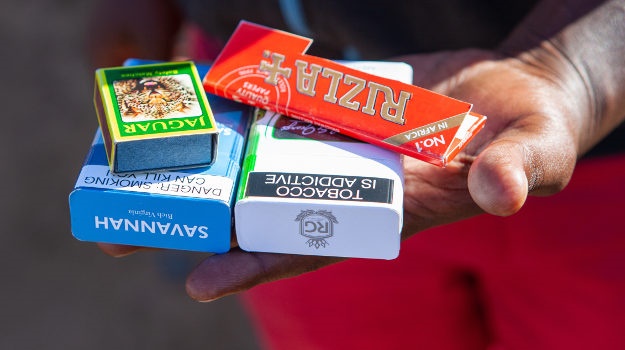 Cigarettes for sale in Johannesburg in May during the lockdown.
Gallo Images/Papi Morake

South Africa's largest cigarette manufacturer, British American Tobacco, is set to argue that the emotional well-being of smokers is being harmed by the state's tobacco ban, in its case to have the regulation prohibiting the sale of tobacco products declared unconstitutional.

In an urgent affidavit lodged in the Western Cape on Sunday, the tobacco giant argues that tobacco and vaping products are "similar to coffee in the ways they are experienced and used by consumers," provide users with "enjoyment and help them cope in stressful circumstances".

Banning them, it says, has harmed the "emotional well-being" of smokers, and is unconstitutional.

The crux of BATSA's court application is to have the specific regulation prohibiting the sale of tobacco products declared unconstitutional. The group is arguing that the ban unjustifiably limits the economic rights of farmers and manufacturers, while infringing on the rights of smokers to enjoy "psychological integrity", among other reasons.

The applicants hope to secure a court date later this month. Their application is distinct from a separate case being brought by the Fair Trade Independent Tobacco Association to have the ban undone.

SA banned the sale of tobacco at the start of the nationwide lockdown in late March, citing health reasons. The ban was extended under Level 4 and again under Level 3 of the lockdown.

In defending the ban, the government has argued that emerging research shows smoking leads to more severe cases of Covid-19, and the ban is necessary to reduce strain on SA's health system.

BATSA, meanwhile, said the ban has cost it between R300 million and R350 million in lost revenues per week, and has harmed the prospects of SA's tobacco farmers, who sell roughly 90% of their stock in the local market. BATSA estimates that the fiscus lost out on roughly R2.4 billion in lost taxes during the first eight weeks of the lockdown, which it says coincided with a steep rise in illicit trade.

While Minister of Cooperative Governance and Traditional Affairs, Dr Nkosazana Dlamini-Zuma, argued in an affidavit in a separate court matter that the ban appears to have been successful in cutting cigarette use, BATSA cites a research report by the Research Unit on Economics of Excisable Products at the University of Cape Town, which found that 90% of smokers still managed to buy cigarettes after the lockdown commenced.

See all newsletters
Voting Booth
How has Covid-19 impacted your financial position?
Please select an option Oops! Something went wrong, please try again later.
I'm not really directly affected
18% - 1922 votes
I am taking a hit, but should be able to recover in the next year
23% - 2527 votes
My finances have been devastated
34% - 3763 votes
It's still too early to know what the full effect will be
25% - 2699 votes
Previous Results
Covid-19 Money Hub
Covid-19 Money Hub - answering your business and money questions during the crisis