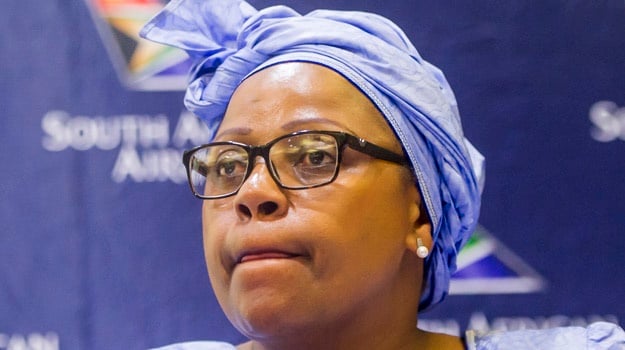 Former SAA chair Dudu Myeni pleaded guilty in the Johannesburg Magistrate's Court on Wednesday to a charge of obstruction of justice for naming a protected witness at the Judicial Commission of Inquiry into State Capture.

The court ruled that she pay a R120 000 fine, or face two years in prison. Half of the amount was suspended for five years.

She named the person she assumed was Mr X in public testimony, despite being cautioned by the inquiry's chairperson, Chief Justice Raymond Zondo, that the witness would remain anonymous.

Her lawyer argued, in mitigation of sentence, that she was a first-time offender who will be turning 60 years old in October. The lawyer also argued that Myeni was not gainfully employed, had not earned an income since 2017, and was declared a delinquent director for life and could not pursue any business interests.

Her lawyer also said Myeni admitted to the wrongfulness of her action and has not tried to evade justice.

Myeni was in court on Wednesday. After proceedings she went to pay a R30 000 portion of the fine. A second payment of R30 000 must be paid on or before 29 August. The remaining R60 000 was suspended.

Her conduct was criticised by the civil society watchdog Right2Know Campaign, which accused her of placing an "important whistle blower in harm's way."

Mr X is the owner of a construction company which is said to have received three payments in excess of R3 million from Premier Attraction 1016 - a company owned by Dudu Myeni's son, Thalente, as News24 reported.

Mr X said Myeni called him after those deposits were made and instructed him what to do with the money. He claimed that Myeni asked that cash be withdrawn and made available to her and also that some of it be paid to the Jacob Zuma Foundation.

Myeni served as the chair of SAA between 2012 and 2017. The National Prosecuting Authority (NPA) said the state and Myeni had entered into a plea agreement with the state and the parties proposed a fine as an appropriate sentence.

"We both agreed that this is a just sentence that strikes a balance between the interest of justice, the seriousness of the offence and the interests of the accused," said the NPA Gauteng spokesperson Phindi Mjonondwane.

"The sentence speaks to the principle of equality before the law, and we welcome the court's decision. We believe that it would serve as a lesson to society that once the chairperson has made an order during a commission, the order has to be adhered to."

The first volume of the State Capture Inquiry report, released in January, recommended probes into Myeni and the affairs of numerous former high-ranking SAA officials who served under her.

*This story has been corrected to reflect that the suspended period for half the fine was five years and not two years as originally reported.