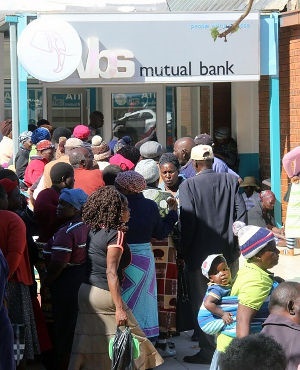 Desperate clients of VBS Mutual Bank gather at one of its branches. Picture: Armando Chikhudo

VBS Mutual Bank's liquidators will meet creditors of the ill-fated bank in November in Polokwane,  where the latter can lodge claims on the estate of the bank.

The meetings will take place under the auspices of the Master of the High Court in Limpopo.

Next month, it will be almost a year since the bank was liquidated, after the Reserve Bank found it to be "hopelessly insolvent". An estimated R2 billion was looted from the bank, with depositors, including a number of municipalities, losing money.

The statement said individual depositors - including  burial societies, stokvels and savings clubs - had the option to claim up to R100 000 from Nedbank.

"Any creditors whose VBS funds exceeded R100 000 guaranteed by National Treasury and who have claimed from Nedbank, will have the opportunity to prove their outstanding claims with the Master of the High Court," the statement said.

In the statement the appointed liquidator of VBS Mutual Bank, Anoosh Roopal,  said there were no guarantees for claimants, even though admitting valid claims to the Master of the High Court was part of the insolvency process.

"There is however no certainty that claims will be accepted by the Master nor that any amount of their claim will eventually be available to claimants.  It merely proves who the legal claimants are of the bank," Roopal said.

The statement said municipalities that lost money from depositing at VBS Mutual Bank would have to seek their own legal advice and attend the 8 November meeting of creditors in Polokwane.

At the last meetings in March, claims were accepted from Mahikeng Local Municipality, Madibeng Local Municipality and West Rand District Municipality.
We live in a world where facts and fiction get blurred
In times of uncertainty you need journalism you can trust. For 14 free days, you can have access to a world of in-depth analyses, investigative journalism, top opinions and a range of features. Journalism strengthens democracy. Invest in the future today. Thereafter you will be billed R75 per month. You can cancel anytime and if you cancel within 14 days you won't be billed.
Subscribe to News24
Related Links
MPs seethe as no-one pays for municipality's VBS mess
Company eyeing VBS hails sequestration of remaining directors, vows payback
PIC wins court bid to have two former VBS directors declared delinquent
Next on Fin24
Barclays halves stake in Absa via R10.5bn stake sale