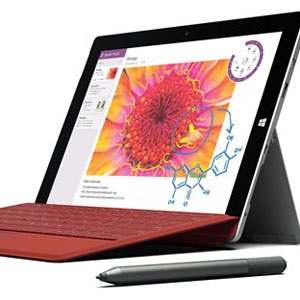 Microsoft is making the cheaper version of its Surface Pro 3 tablet computer in an effort to reach more people. (Microsoft, AP)

Microsoft is going for the low-end of the personal computing market with a smaller, cheaper Surface Go tablet that takes on Apple’s cheapest iPads.

The Surface Go has a 10-inch screen, about the same size as the entry-level iPad. At $399 (R5 386), the device is $400 (R5 400) cheaper than the current Surface Pro tablet, but has slower Intel processors and about four hours less battery time, Microsoft said.

Like Microsoft’s earlier devices, the Surface Go will work with an optional keyboard and mouse.

The company announced cheaper versions of both accessories on Monday.

Introducing the newest member of the Surface Family – Surface Go. This device gives you the freedom to go, do, be anywhere. Learn more: https://t.co/isAkdhZu7w pic.twitter.com/NkWUCxIyax

For the first time on Microsoft hardware, the Go will use the USB-C charging standard. The new tablets come in multiple configurations, including 64, 128, and 256 gigabyte storage options and 4 or 8 gigabytes of RAM. Prices range from $399 to more than $549.

The sub-$400 price point is key for Microsoft as it tries to turn its Surface business into a more serious challenger to other computer hardware makers. Cheaper devices can attract students who get comfortable with the technology and spread it to the workplace after they graduate.

That strategy has helped Apple, which unveiled a $299 iPad earlier this year for schools. Google has also seen some success with its low-cost Chromebook laptops.

The Surface Go is still more expensive than the cheapest iPad, but the Go tablet is compatible with professional features, like the detachable keyboard, that are missing on the entry-level iPad. Bloomberg News reported on Microsoft’s new tablet line in May.

Microsoft released a $499 Surface 3 tablet in 2015 but discontinued the product in 2016. The software giant kicked off its consumer hardware push in 2012 with the launch of the Surface RT. These tablets didn’t resonate with consumers, so the company focused more on pricier Pro models.

So far, Microsoft has struggled to make a hit Surface product. The business generated $4.4bn in revenue in the past four quarters. Apple sold $20bn worth of iPads in the same period.

* Sign up to Fin24's top news in your inbox: SUBSCRIBE TO FIN24 NEWSLETTER
We live in a world where facts and fiction get blurred
In times of uncertainty you need journalism you can trust. For 14 free days, you can have access to a world of in-depth analyses, investigative journalism, top opinions and a range of features. Journalism strengthens democracy. Invest in the future today. Thereafter you will be billed R75 per month. You can cancel anytime and if you cancel within 14 days you won't be billed.
Subscribe to News24
Next on Business
Twitter sued over data leak that it denied was caused by a flaw