Toyota has halted operations at its factory in Prospecton, south of Durban after it was flooded in the heavy rains that have battered parts of KwaZulu-Natal this week.

"TSAM's operations have been suspended since Monday evening. Efforts geared towards a safe start-up - after water has been cleared - are in place," manager of corporate marketing Mzo Witbooi said on Wednesday. 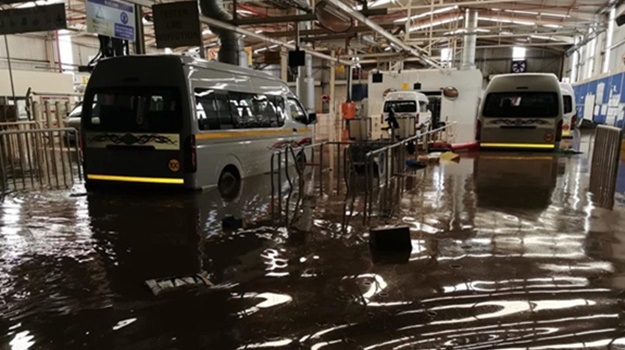 Flooding also impacted the Toyota plant during heavy rains a few years ago, and, although it was not damaged during the unrest in July last year, Toyota had to temporarily suspend operations.

The flooding could not have come at a worse time for the motor retail industry, which is still recovering from the blow delivered by the Covid-19 pandemic, Operations of the Motor Industry Staff Association (MISA) CEO Martlé Keyter said. The union has more than 53 000 members who are dependent on motor vehicle- and component sales, vehicle services and repair work. An aerial view of the devastation caused by the floods.
Supplied MISA (Motor Industry Staff Association)

"Less than a week after Toyota announced that 10 198 light commercial vehicles were either built or assembled at the Prospecton Plant in Durban, images of the flooded plant emerged. This plant was responsible for over 10 000(...) vehicles sold locally last month, according to an earlier statement released by Toyota," says Keyter. Efforts geared towards a safe start-up - after water has been cleared - are in place, says Toyota.
Supplied MISA (Motor Industry Staff Association)

* Images were taken by members of MISA and supplied by the union.

We live in a world where facts and fiction get blurred
In times of uncertainty you need journalism you can trust. For 14 free days, you can have access to a world of in-depth analyses, investigative journalism, top opinions and a range of features. Journalism strengthens democracy. Invest in the future today. Thereafter you will be billed R75 per month. You can cancel anytime and if you cancel within 14 days you won't be billed.
Subscribe to News24
Next on Fin24
Geothermal powerhouse Iceland struggles with lack of electricity