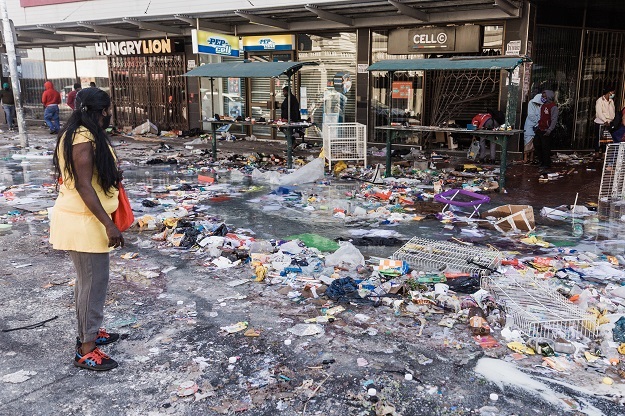 About 80% of respondents indicated that political stability and policy certainty is the biggest factor for them in deciding when to resume full operations or to invest more in SA.
Rajesh Jantilal/AFP

While private security agencies were deemed to have mostly provided effective assistance to commercial property owners during the unrest in KwaZulu-Natal (KZN) and parts of Gauteng and Mpumalanga in July, the same cannot be said of the SA Police Service (SAPS) and the SA National Defence Force (SANDF).

This emerged from a survey conducted by the South African Property Owners' Association (SAPOA) among 20 large commercial property companies and funds. SAPOA is the representative body of the commercial property industry sector in the country, with an estimated 90% of such owners as members.

Respondents represented 53 commercial properties damaged in KZN, 38 in Gauteng, and one in Mpumalanga. These included 2 362 stores looted or damaged and 3 217 jobs lost due to rioting.

About 72% of respondents indicated that they will increase security at their properties by means of the enhanced presence of security personnel or increased fencing surrounding the properties, while 44% plan to install CCTV cameras.

Furthermore, 80% of respondents indicated that political stability and policy certainty were the biggest factors for them in deciding when to resume full operations or to invest more in SA.

For 75% of respondents, a functional and efficient municipality is an important factor and 65% raised the importance of a guaranteed supply of water and electricity.

For 60%, it is important that government address what they regard as excessive property rates, while 55% raised the issue of safety and security and 55% mentioned upgrading and ongoing maintenance of infrastructure as important.

State-owned short-term risk insurer the South African Special Risks Insurance Association (Sasria) - the only insurer covering risks like public disorder - said on Tuesday that the insurance claims by over 14 000 businesses affected by the July looting stood at R32 billion, with R12.6 billion paid out so far. The amount is based on a total of 14 051 claims that have been filed.

We live in a world where facts and fiction get blurred
In times of uncertainty you need journalism you can trust. For only R75 per month, you have access to a world of in-depth analyses, investigative journalism, top opinions and a range of features. Journalism strengthens democracy. Invest in the future today.
Subscribe to News24
Next on Fin24
7 questions to ask if you want to green your investment portfolio