Cape Town – Lonmin [JSE:LON] announced it has completed the acquisition of the 42.5% stake of Anglo American Platinum (AAP) in the Pandora Joint Venture.

"The acquisition allows Lonmin to extend mining at its Saffy Shaft without having to spend R2.6bn of capital expenditure, of which would have been required over the next four years," the company said in a statement.

The effective date for both transactions was 1 December 2017.

"This is an excellent strategic fit for us, which equips us with a valuable contiguous asset with long-term development potential and allows us to maintain production levels at Saffy while significantly reducing our capital expenditure requirements at this operation over the short- and medium-term," said Ben Magara CEO of Lonmin.

Prior to the acquisition, the Pandora JV was held 50% by Lonmin's subsidiary, Eastern Platinum, 42.5% by Anglo Platinum through Rustenburg Platinum and 7.5% by Northam through Mvelaphanda Resources.

The Pandora Joint Venture contributed 32.509 platinum ounces to Lonmin in the 2016 financial year.

Lonmin received a contribution of R117m in its 2016 financial year from the ore purchase agreement, which offset the loss reported by the joint venture.

* Sign up to Fin24's top news in your inbox: SUBSCRIBE TO FIN24 NEWSLETTER
We live in a world where facts and fiction get blurred
In times of uncertainty you need journalism you can trust. For only R75 per month, you have access to a world of in-depth analyses, investigative journalism, top opinions and a range of features. Journalism strengthens democracy. Invest in the future today.
Subscribe to News24
Related Links
Lonmin's future in balance as govt studies non-compliance allegations
Lonmin in a race against time
Lonmin hits back at calls to shut down its operations
Next on Fin24
New class action lawsuit against Anglo American underscores ugly legacy of mining in Africa 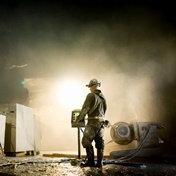