Prosus upbeat about growth amid 'worst' market in four decades 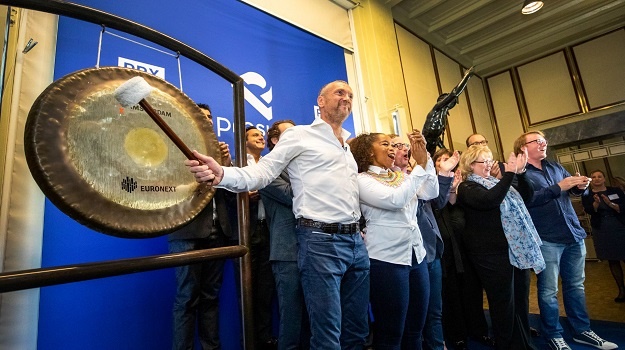 Naspers CEO Bob van Dijk at the listing of Prosus on the Euronext exchange in Amsterdam.

Prosus, the consumer internet arm of Naspers, says it's still extremely confident about its profit growth potential - despite the worst market conditions in four decades. The group says its deep pockets are a huge strategic advantage as many competitors are forced to pare back on their growth ambitions.

Speaking at an all-day Prosus investor day presentation on Tuesday, group CEO Bob van Dijk said he "couldn't agree more" with those shareholders saying that Prosus should be more than just its lucrative Tencent stake. However, the group is still very bullish on the prospects of the Chinese tech giant and, due to the limits on the pace of its share sales, set to be a major investor for years.

Its focus is currently on a drive for profitability in its e-commerce businesses, and it is not actively looking for acquisition opportunities unrelated to its current businesses. Prosus had an advantage even as the world faced recession, given the group's deep pockets, and focus on high-growth markets, said Van Dijk. The markets include China and India, Latin America as well as Eastern Europe.

Read this for free
Get 14 days free to read all our investigative and in-depth journalism. Thereafter you will be billed R75 per month. You can cancel anytime and if you cancel within 14 days you won't be billed.
Try FREE for 14 days
Already a subscriber? Sign in
Next on Business
Prasa to cough up hundreds of millions for breaking wage agreement