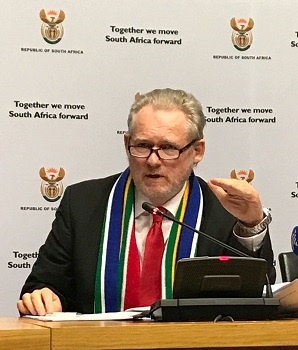 Cape Town – The department of trade and industry (dti) is dealing with the steel glut by providing a R500m incentive scheme for metal and engineering, Parliament has heard.

Trade and Industry Minister Rob Davies on Tuesday tabled the budget vote in Parliament where he shared some of the department’s key priority areas.

Among these is to provide support for the metal and engineering value-chain which has been troubled by electricity price hikes and slowing demand from the mining sector, Davies explained.

The “use of incentives and other industrial policy tools” could stabilise sectors in distress, as was seen in the clothing and textiles industry, Davies said.

At a briefing ahead of the tabling of the budget vote, Davies explained to journalists that the global steel glut was damaging steel production sectors across the world.

“In that context there have been no easy choices. It has not been angels or devils in terms of making decisions.”

This involved taking decisions on tariffs to defend the largest steel manufacturer in South Africa, ArcelorMittal.

If the manufacturer had closed down it would have led to job losses, in addition to having knock-on effects downstream.

Davies explained that to save the industry it is important to raise competitiveness by raising investment. “We want a similar story in metals and engineering… We need to ensure we defend ourselves in [the] current environment.”

He said that the sectors had been losing ground and it is necessary to take measures against the global steel glut.

South Africa recently lost out to being exempt from an increase in US tariffs on steel and aluminium products.

He said that this shows the importance of accelerating regional integration across the continent.

Davies reaffirmed South Africa’s commitment to being party to the African Free Trade Plan once the legal aspects of the agreement are ironed out.