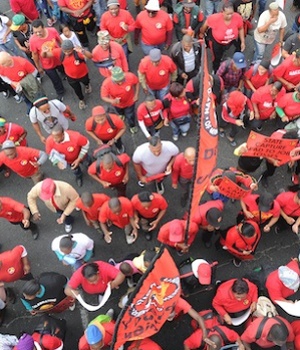 South Africa’s largest labour federation is prepared to discuss reducing workers at the nation’s power utility if it’s given proof of over-staffing and that job cuts would save Eskom.

Until now, proposals to turn around the debt-ridden, loss-making utility have been met with fierce opposition from labor unions.

In June, Eskom had to implement rolling blackouts when workers protested plans for zero pay increases and in February union members picketed at the company’s headquarters over potential job cuts.

"We are asking them to please table the evidence and research that indicates" that Eskom has too many workers, Bheki Ntshalintshali, general secretary of the Congress of South African Trade Unions (Cosatu), said in an interview at Bloomberg’s Johannesburg office.

Neither Eskom nor the government has provided information on which specific jobs aren’t required, he said, adding Cosatu may be prepared to discuss how workers could be moved.

Eskom is seen by credit-rating companies as one of the biggest risks to Africa’s most-industrialised economy.

It’s struggling to meet demand for power from aging plants and to boost revenue after years of financial mismanagement. The company was at the center of alleged looting under the previous administration.

The World Bank estimates that the power utility has 66% too many employees, while Eskom has said of its 48 600 employees it has 16 000 more workers than it needs.

"How did it happen that they just employed more and more people?" Ntshalintshali said. "Clearly, there was no plan. You can’t employ people today and tomorrow you say you are overstaffed."

While President Cyril Ramaphosa has replaced the utility’s board, Cosatu wants the government to take a hard line on prosecuting those responsible for looting at state-owned companies, including Eskom.

Without setting an example by going after the alleged perpetrators and installing the right management, steps such as job cuts won’t get Eskom back to financial health, the federation said.

Ramaphosa announced in February that Eskom will be split into three units and, while he insists that the utility will not be privatised, Finance Minister Tito Mboweni said in the budget the government will invite private businesses to invest in the transmission unit.

"We are jittery because, as much as the president says there is not going to be any retrenchments or job losses, if you listen to Treasury and the public enterprises minister, these are proponents for privatisation," Cosatu First Deputy-President Michael Shingange said.

Cosatu opposes any privatization of the network because it could make electricity too expensive for the majority of poor South Africans.

"How are we going to stop them from hiking the price?" Shingange said. "It’s not only about job losses for us, it’s about the fact that electricity is already extremely unaffordable to our people. Imagine when it is in the hands of private individuals."

We live in a world where facts and fiction get blurred
In times of uncertainty you need journalism you can trust. For only R75 per month, you have access to a world of in-depth analyses, investigative journalism, top opinions and a range of features. Journalism strengthens democracy. Invest in the future today.
Subscribe to News24
Related Links
Most South Africans want investment in renewables, not coal – survey
Brian Molefe, third time unlucky, over Eskom pension payout appeal
Interruption to Eskom feed causes power outage at Cape Town International
Next on Fin24
Find your load shedding schedule