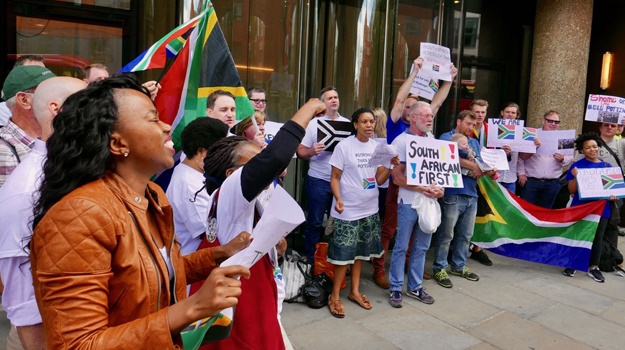 A picket outside the offices of Bell Pottinger in September 2017.

The liquidators of disgraced former UK-based public relations firm, Bell Pottinger, are still owed £1.8 million (roughly R36 million at current exchange rates) by some of the group's partners, according to a new filing.

Bell Pottinger went into administration in September 2017 after its clients deserted it and it was expelled from the UK's premier public relations industry body for work it did for the Gupta family.

The storied public relations firm had its membership of the UK's Public Relations and Communications Association revoked in early September 2017 after it was found that its work for the infamous Gupta family was "by any reasonable standard of judgement likely to inflame racial discord in South Africa and appears to have done exactly that."

The Gupta brothers, who are believed to be in the UAE, are facing a number of charges in South Africa related to corruption. In October 2019 they were sanctioned under the Magnitsky Act in the US for "leveraged overpayments on government contracts, bribery, and other corrupt acts to fund political contributions and influence government actions."

A week after it was expelled from the industry organisation three years ago, Bell Pottinger went into administration, with BDO appointed as its liquidators.

In a progress report published earlier in the week and first reported by The Times, joint liquidators Matthew Tait and Malcolm Cohen said former Bell Pottinger partners still owe £1.8 million in "excess drawings". Drawings refer to funds or assets taken out a business by its owner or partners. Tait and Cohen did not name the individuals involved.

They said that they had also been in contact with the lawyers of a partner, who they did not name, for a claim of breach of contract and a "significant and related excess drawing claim".

The liquidators noted that the UK insolvency service is, in a separate matter, seeking disqualification of three former Bell Pottinger members.

"This is a misfortune of their own making," said the DA's Phumzile van Damme, who in 2017 in her capacity as the party's spokesperson helped lodge a complaint against the PR group with the PRCA.

"I hope this is a lesson to all PR firms against unethical behavior that seeks to spread disinformation. And also to entities that have of late spread inflammatory messages scapegoating foreign nationals for South Africa’s ills. You will be caught, you will exposed and you suffer the consequences."

We live in a world where facts and fiction get blurred
In times of uncertainty you need journalism you can trust. For only R75 per month, you have access to a world of in-depth analyses, investigative journalism, top opinions and a range of features. Journalism strengthens democracy. Invest in the future today.
Subscribe to News24
Related Links
Lord Tim Bell, co-founder of Bell Pottinger, dies aged 77
From Bell Pottinger to street politics, here are 6 key quotes from Gordhan's testimony to Zondo
British govt agency probing former Bell Pottinger directors - Financial Times
Next on Fin24
Eskom to suspend load shedding from 11pm