The Northern Cape is running out of transmission capacity and the province will not be able to connect any new renewable energy generation projects, a report from Eskom shows.

Eskom's Generation Connection Capacity Assessment of the Transmission Network is a document issued to make available information on its transmission network's potential generation connection capacity for the use of independent power producers.

The assessment was revised following the announcement of bid window five of the Renewable Energy Independent Power Producer Procurement Programme (REI4P). Bids for over 100 solar PV and wind projects have been submitted to the Independent Power Producer Procurement Programme Office. The successful bids are expected to be announced in early October, according to the Department of Mineral Resources and Energy (DMRE).

Phase 1 of the assessment, dated June 2021, accounts for 10.5 GW of generation capacity from six supply areas - the Northern Cape, North West, Western Cape, Eastern Cape, Free State and the Hydra cluster, which spans over a few inland provinces. Phase 2, considering the remaining supply areas, will be released later this year.

While there is transformation capacity at its substations, it does not have transfer capacity from these substations. 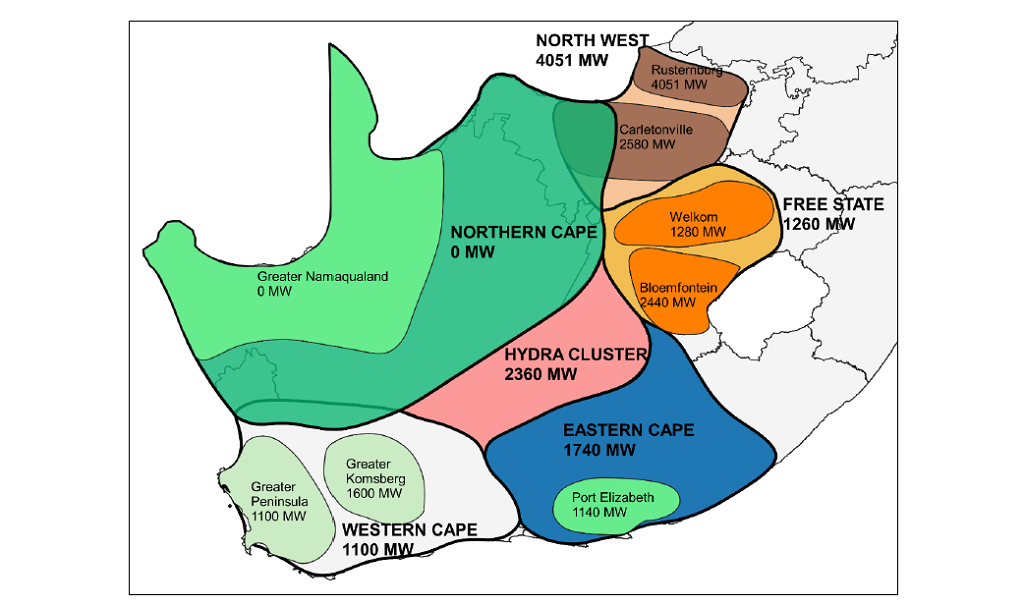 Most of the renewable energy projects in the country are located in the Northern Cape, given its vast solar and wind resources.

Fourie added the lack of grid capacity meant that potential new energy projects should consider locations outside the Northern Cape. Luckily, South Africa has an abundance of solar and wind resources spread across the country. "This creates an opportunity for a more socially just transition to cleaner energy, which can also result in a fairer distribution of skills and jobs across more provinces. The development of new projects in other parts of the country brings with it the opportunity of new job creation, and it can also redeploy those currently employed in the coal sector," said Fourie.

Mercia Grimbeek, chairperson of the South African Wind Energy Association, said that the renewable energy sector was looking to other provinces for bid windows 5 and 6 of the REI4P for suitable grid access. So far, there are 11 wind farms in the Northern Cape.

"While this is not ideal, it will help to accelerate the energy transition as the sector will develop projects in other areas that are resource-rich, as it is forced to shift its focus," said Grimbeek.

Grimbeek said that government needs to urgently deliver on its commitment to establish an Independent Transmission Grid System and Market Operator (ITSMO). An ITSMO will enable further generation investment by independent power producers.

The legal separation of Eskom's transmission entity is due to be complete by December this year.

Delivering an address at the University of Pretoria earlier this month, Eskom CEO André de Ruyter said that about R118 billion is needed to expand the transmission grid by 8 000km.

Eskom is yet to respond to Fin24's request for comment.