Cosatu should be consistent and treat Ramaphosa like Zuma – AMCU 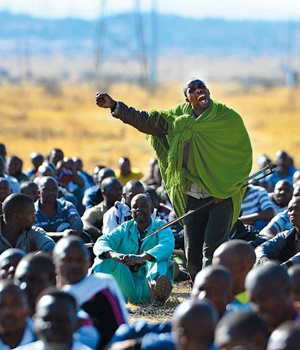 President Cyril Ramaphosa still has the cloud of the Marikana Massacre over his head and the Congress of South African Trade Unions (Cosatu) should reconsider his address at the congress's main rally, said the Association of Mineworkers and Construction Union (AMCU).

AMCU on Monday issued a statement indicating it would not commemorate Workers Day on May 1. Instead it wants August 12 to be declared a public holiday, in commemoration of the 34 striking mineworkers killed by the police in Marikana on that day, it said.

The union took aim at Ramaphosa  who is expected to address Cosatu’s main rally on Tuesday at Nelson Mandela Bay, Eastern Cape. Ramaphosa is expected to receive a warm welcome by Cosatu members, this is in contrast to former president Jacob Zuma who was prevented from speaking at the Workers Day event in 2017 by a jeering crowd who wanted him to resign.

“If Cosatu was consistent they would use the same principle approach to review the address by the current State President; a champion in neo-liberal minimum wage as well as oppressive labour relations amendments and a conflicted Lonmin (Marikana) Massacre associate who is yet to tender his apology,” AMCU said.

Ramaphosa was a Lonmin non-executive board member in 2012 and famously asked the police to use “concomitant action” against striking mineworkers. He was cleared of wrongdoing by the Farlam Commission of Inquiry.

AMCU shot to prominence in the aftermath of Marikana in 2012 and is currently the majority union on the Platinum Belt.

“Workers Day must commemorate our struggle. Lonmin (Marikana) Massacre is the epitome of our struggle. 16 August must be our Workers Day. Government must declare 16 August as South African workers day in commemoration of the Lonmin Marikana massacre,” the union said in a statement on Monday.

The history of May Day or Labour Day - as it is sometimes times known - began in 1884 when Canadian and American unions demanded that an eight hour work day be instituted from May 1, 1886. Ahead of the 100th anniversary, the Congress of South African Trade Unions (Cosatu) called for a mass stay-away on May 1, 1986 and held several rallies, despite banning orders by the apartheid government.

AMCU said that “history is dynamic” and there are “compelling grounds to review this date in line with recent experiences in our history”. The union also pointed to other countries such as the US which celebrates Labour Day in September.

“As a trade union we hold the Lonmin (Marikana) Massacre in the same logical plane as the Soweto Uprising and the Sharpeville Massacres, just to mention a few; which have managed to symbolise the youth and human rights struggles of our country. It is this symbolism that gives meaning and relevance, within context, to a public holiday for whatever purpose.”

Saftu - the only large labour federation outside of Nedlac- held a one day stay-away on Wednesday demanding a higher minimum wage and the scrapping of changes to the labour laws.

We live in a world where facts and fiction get blurred
In times of uncertainty you need journalism you can trust. For only R75 per month, you have access to a world of in-depth analyses, investigative journalism, top opinions and a range of features. Journalism strengthens democracy. Invest in the future today.
Subscribe to News24
Related Links
Sibanye-Stillwater vows to start on a clean slate at Marikana
NPA must prosecute 2012 Marikana deaths, Amnesty says
May Day booing sign of a healthy democracy, says unfazed Zuma
Next on Fin24
May Day: Public sector strike will be a sign that govt is 'sticking to its guns'

See all newsletters
Voting Booth
In light of the recent looting, do you think a basic income grant is the right approach to deal with SA’s hunger and poverty problems?
Please select an option Oops! Something went wrong, please try again later.
It will go a long way in helping fight the symptoms of SA’s entrenched inequality, especially for those who are starving right now
20% - 1493 votes
SA’s problems are complex, and we instead need to spend that money on building and growing our economy, which will help the country in the long run
31% - 2314 votes
All grants are a problem as they foster a reliance on handouts
49% - 3656 votes
Previous Results
Covid-19 Money Hub
Covid-19 Money Hub - answering your business and money questions during the crisis