Mbeki: There's nothing to gain from nationalising the Reserve Bank 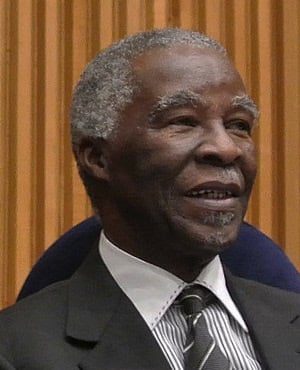 Nothing meaningful can be gained from nationalising the Reserve Bank, former president Thabo Mbeki has said.

He was speaking alongside Gauteng Premier David Makhura and ANC head of elections Fikile Mbalula at the Rand Easter Show on Tuesday, as part of the ruling party's election campaign.

"Really, to this day, I do not know what anyone would gain by the nationalisation of the Reserve Bank, except to say we have nationalised," Mbeki said.

No change to operations

Mbeki stressed that nationalising the central bank would not change its operations in any way.

At the party's elective conference in December 2017, the ANC resolved to have a fully state-owned bank.

The Reserve Bank was established in 1921, at a time when the majority of the world's central banks were privately owned. By the 1930s, the nationalisation of central banks was introduced, given widespread economic hardships of the time, such as the Great Depression. But in SA, the structure did not change, the Reserve Bank explained in a note on its website.

The SA Reserve Bank is one of a handful of other banks which have private owners. Others include Greece, Belgium and the US.

Shareholders receive a limited dividend of 10c per share per annum. They have no say on policy decisions taken by the Reserve bank in implementing its mandate and they can elect a maximum of seven non-executive directors to the Reserve bank board, Fin24 previously reported.

Speaking at Davos earlier this year, President Cyril Ramaphosa emphasised that the bank would remain operationally independent regardless of its ownership structure, Fin24 reported previously.

He added that the bank's independence was entrenched in the Constitution and government would not interfere with that.

We live in a world where facts and fiction get blurred
In times of uncertainty you need journalism you can trust. For only R75 per month, you have access to a world of in-depth analyses, investigative journalism, top opinions and a range of features. Journalism strengthens democracy. Invest in the future today.
Subscribe to News24
Related Links
SA Reserve Bank says too early to claim inflation win
SA blackouts may cut growth close to zero, Reserve Bank says
Reserve Bank: Damage wreaked by state capture even worse than we thought
Next on Fin24
Rate hikes unlikely to weigh on SA home buying in 2022, FNB says