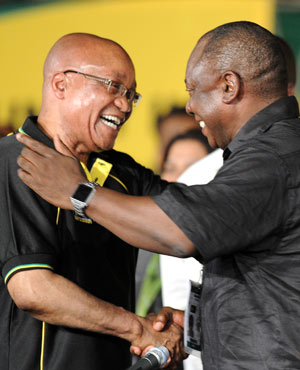 Johannesburg - “Radical economic transformation” has become the South African government’s new mantra as it advocates giving the nation’s black majority a bigger stake in the economy 23 years after the end of white-minority rule.

What exactly it means is unclear. The phrase doesn’t appear in the National Development Plan, the government’s economic blueprint, and President Jacob Zuma and his deputy Cyril Ramaphosa have painted different pictures of how it should be translated into policy.

Zuma is due to step down as leader of the ruling African National Congress in December and as president in 2019, and Ramaphosa is one of the front-runners to succeed him. Here’s what they’ve been saying.

Support independent journalism
Subscribe to News24 for just R75 per month to read all our investigative and in-depth journalism.
Subscribe
Already a subscriber? Sign in
Next on Fin24
Gautrain daily commuter numbers dip by more than 76% owing to Covid-19 pandemic

See all newsletters
Voting Booth
Should government have assigned a majority shareholding in SAA to the private sector?
Please select an option Oops! Something went wrong, please try again later.
Yes, It's a good decision
70% - 599 votes
Not a good move
9% - 75 votes
Too early to tell
22% - 185 votes
Previous Results
Covid-19 Money Hub
Covid-19 Money Hub - answering your business and money questions during the crisis