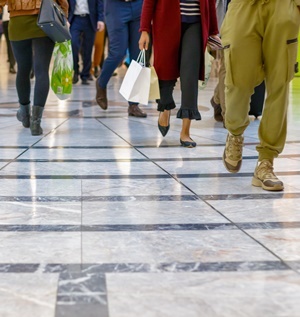 The festive season did little to bring cheer to SA's depressed retail industry, which experienced a contraction in consumer spending for the month of December.

Retail trade sales decreased by 0.4% year-on-year in real terms in December, according to figures released by Statistics SA on Wednesday. Sales volumes rose marginally by 0.8% in the fourth quarter of 2019, when compared with the same period last year. The country ended 2019 with a meagre 1.2% growth in retail trade sales for the year.

This 0.4% decline was below the projections of most analysts. NKC African Economics had estimated that annual retail sales would likely grew by 3.5% in December.

This comes as the local retail industry continues to grapple with one of the toughest periods in its recent history. Consumer confidence slumped deeply into negative territory in 2019, while consumer inflation closed the year at 10-year low.

In the past, even in difficult periods, the festive season has been seen retailers do better. But South Africa has started to buck this trend as December sales shrank 2018 and 2019.

The main contributors to December's decline were in hardware, paint and glass, general dealers and other retailers.

StatsSA's figures corroborate a recent statement by Massmart, which last month noted a 2.6% decline in its general merchandise sales in the 52-week period ending 29 December 2019.

The struggle by local retailers to grow sales volumes is already threatening thousands of jobs in one of the country’s most labour-intensive industries. Massmart and Edcon are two groups where store closures have been proposed.

FNB senior economist, Siphamandla Mkhwanazi, said in a note that while unexpected, the decline in sales in December was consistent with record-high unemployment and low consumer sentiment levels.

“Under these conditions, households appear to have become highly price-sensitive and are willing to delay purchasing decisions until goods are placed on special. Unfortunately, this exerts downward pressure on retailers’ margins, further compounding the unemployment conundrum, as evidenced by a decline in employment in the trade sector in the fourth quarter of 2019,” he said.

See all newsletters
Voting Booth
Do you think it was a good idea for the government to approach the IMF for a $4.3 billion loan to fight Covid-19?
Please select an option Oops! Something went wrong, please try again later.
Yes. We need the money.
11% - 949 votes
It depends on how the funds are used.
74% - 6331 votes
No. We should have gotten the loan elsewhere.
15% - 1306 votes
Previous Results
Covid-19 Money Hub
Covid-19 Money Hub - answering your business and money questions during the crisis