Theresa May's Brexit deal: What we know so far

UK Prime Minister Theresa May will ask her cabinet to back her draft Brexit deal on Wednesday, despite the fact that she might still fail to get it past her own Conservative Party.

Here’s what’s said to be in the terms of the UK’s divorce deal so far, according to officials briefed on its contents.

The Irish Border
This was the hardest part to negotiate but convincing May’s own side to back it could be even more difficult. Under the terms of the so-called backstop guarantee -- designed to avoid border checks on goods crossing the land frontier with Ireland -- the whole UK will be in a customs union with the EU.

There will be no way for the UK to unilaterally leave that backstop arrangement, despite May’s efforts to secure a suitable exit mechanism. What it means: This is a toxic combination for pro-Brexit Tories in May’s team who want to “take back control” of British laws, tariffs and borders, and strike free trade deals around the world.

The British Border
May wanted to avoid a new customs border in the Irish Sea, separating mainland Britain from Northern Ireland. But Northern Ireland will be more deeply embedded in the EU’s customs union than the rest of the UK because it will sign up to the EU’s full customs code, according to three European officials and one British official.

The treaty will set out differences between the treatment of Northern Ireland and the rest of the U.K., according to diplomats. Northern Ireland will stick to some of the EU’s single market rules for goods so that food and agriculture products can cross the Irish border without red tape.

This is a major risk for May. In order to stay in power, she relies on the votes of Northern Ireland’s Democratic Unionist Party in Parliament. They have vowed to oppose any deal that keeps Northern Ireland in a different customs or regulatory regime from the rest of Britain.

The City of London
As expected, British finance lost its seamless path to the EU. Instead, its access will be largely in the hands of Brussels officials, who will determine whether there is a regulatory level playing field.

The set-up, in which access typically can be withdrawn on short notice, is known as "equivalence."

ITV’s Robert Peston reported one concession by the EU on equivalence: British businesses would have time to prepare if permission is revoked. The British finance industry has criticized equivalence as unworkable.

"The problem is this system is only partial -- it covers only a third of what happens in the City; really basic things, like banking payments systems, are not covered," Catherine McGuinness, an official at the City of London Corporation, which governs the financial district, said on the BBC’s Radio 4 program Wednesday.

"It’s precarious, because an equivalence decision can be withdrawn on as short as 30 days’ notice."

The Trap
May’s pro-Brexit ministers initially demanded a fixed end date to the backstop, to ensure the U.K. wouldn’t be kept captive inside the EU customs union forever.

The EU refused, insisting that there could not be a time limit to a guarantee clause that might be needed indefinitely. Instead, the deal offers a review mechanism, but it does not give the U.K. the power to unilaterally withdraw from the backstop. Again, this is unacceptable to hardline Brexit supporters in May’s Tory party.

Legal Advice
May is facing calls to give the cabinet the full private legal advice spelling out why exactly her deal is worth supporting -- and especially how it can reassure pro-Brexit ministers that the UK can’t be kept against its will in the backstop customs arrangements forever.

Instead, she’s provided a summary of that legal opinion, produced by Attorney General Geoffrey Cox, and it gives no comfort to worried ministers.

According to one person familiar with the matter, the summary legal advice won’t help May. It makes clear that she failed to negotiate any meaningful new mechanism to give the UK more control over how long it will be forced to stay in the backstop regime.

The Money
Toward the end of the transitional period in 2020, the UK will be able to choose between extending these existing status quo trade terms -- at a price of continuing its annual payments of about 10 billion pounds ($13 billion) to the EU -- or dropping out of the single market and customs union and into the Irish border backstop.

That would mean no need for such payments, but it would also mean committing to keeping inside the EU’s customs regime indefinitely.

Future Partnership
The 600-page divorce deal also contains a far shorter blueprint for the future relationship between the U.K. and the EU. This draft makes clear that the backstop arrangement for Northern Ireland will set the baseline for friction-free trade across the Irish border for the long term.

Any future trade deal must provide as a minimum the same open border on the island of Ireland. The draft text holds out the prospect -- which Brexit backers crave -- of a slimmed down, Canada-style free trade agreement.

But it will only be for mainland Britain. If the government chooses such a deal, Northern Ireland will have to remain inside the backstop customs regime of the EU while the rest of the country goes its separate way.

Such an outcome will be unacceptable to Tories who value the union of the United Kingdom, and those DUP politicians who prop up May’s minority government.

* Sign up to Fin24's top news in your inbox: SUBSCRIBE TO FIN24 NEWSLETTER
Related Links
Countdown to Brexit: 137 days until Britain leaves the EU
Pressure mounts on Theresa May to abandon Brexit proposal
UK trade secretary says no new Brexit vote, even if country crashes out of EU
Share
Next on Fin24
WATCH | Facebook Oversight Board to launch in October 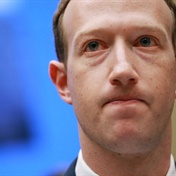