How to beta build your portfolio What a year it’s been so far. After the FTSE/JSE All Share Index ended 2019 with more than 12% growth, and the MSCI All Country World Index with a whopping 27% growth in US dollar terms, consensus forecasts for 2020 were optimistic. Sobering were the events that followed when our local market had already declined by 33% by mid-March (19 March 2020) due to the Covid-19 pandemic, which now has the whole world in a state of disarray. Suddenly optimism has turned into utter panic.

The two main drivers in the financial world – greed and fear – are constantly and increasingly battling one another. This poses an important question. How do I get these two emotions to live together in peace?

The good news is that I have the answer to this question: Just own investments that offer the lowest risk and the highest returns. The bad news is that no one really has the appropriate method, or knows how to apply this solution practically.

Most investors who are currently invested in shares are one of two kinds of people: Long-term investors who are content with short-term price fluctuations, or short-term speculators who feel that the probability of share price increases are incredibly good. For the latter, taking a closer look at the beta value of their investments right now wouldn’t be a bad idea.

The beta defines the potential volatility of your share’s return or decline, compared with the volatility of the overall market or index. In simple terms, if a share has a beta of 1, it means that for every percentage point that the market moves up or down, your share price will move up or down by the same percentage.

A beta of 0.8 will mean that your share price will only rise by 0.8% for every 1% rise in the market, but it willalso only decline by 0.8% for every 1% market decline. As the saying goes, “Half a loaf is better than none”. It might not be a bad idea to shift your focus to low-beta shares for the time being. That way, if analysts’ predictions are correct in that the market will rise, you will still benefit. If their predictions are wrong, your losses in a market decline should be lower.

I worked through the FTSE/JSE Top 40 Index and identified the five shares with the highest and lowest five- year average betas (see tables).

The remarkable thing about these two tables is that shares from the Top 40 index that have the highest five- year average betas are mostly platinum mines, but, more importantly, also some of the best performers on the JSE over the last five years. The five lowest beta shares are companies that can mainly be described as consumer- driven businesses.

I took things one step further by building two separate portfolios from each of the list of the five highest betas, and the five lowest betas, and then compared these two portfolios’ performance with that of the Top 40 index, and the results were quite staggering (see graph). 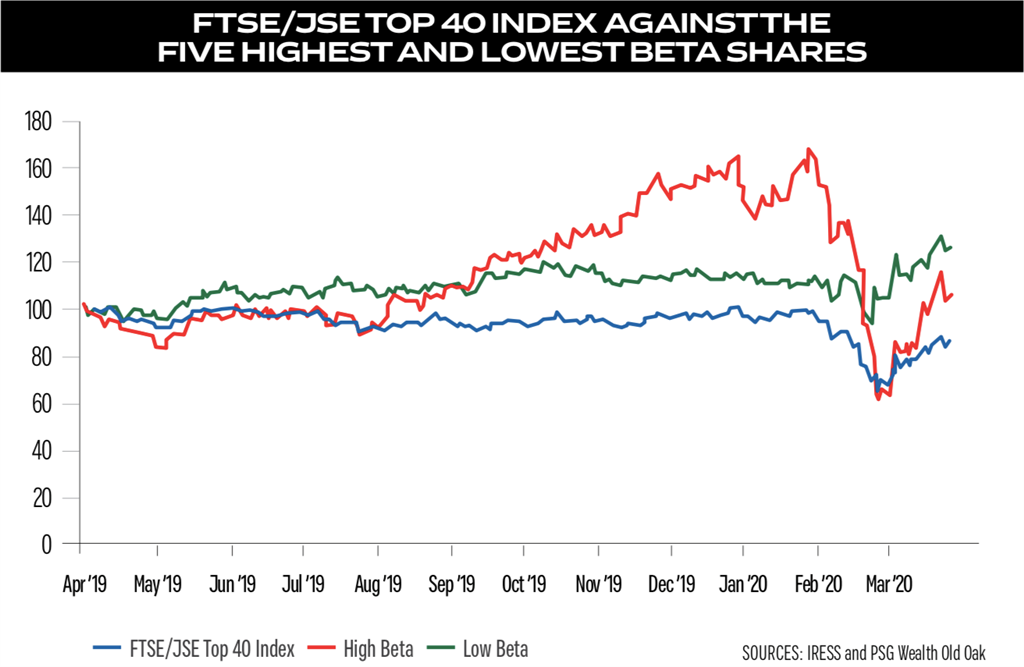 Three of the five highest beta shares are platinum mines, which had good runs in 2019, so it makes sense that the high beta shares outperformed the index over the past 12 months (until 17 April 2020). What made this so interesting, however, is the fact that “low risk” didn’t necessarily mean “low returns” over this period. Not only are the five lowest beta share prices still (up to 17 April 2020) trading 25% higher compared with 12 months ago, but in the graph you can clearly see that they were much less volatile than the high beta shares and the index.

I’m not recommending that investors run wild in search of only low beta shares right now. Doing your homework remains key to your portfolio’s success. This is simply another tool you can use in compiling your personal share portfolio. Always invest with your mind and keep your emotions out of the management process.

This is an extract of the cover story that originally appeared in the 7 May edition of finweek. For the full story, you can buy and download the magazine here.

Related Links
Investing offshore after the rout
Look to retail bonds for cash flow when dividends disappear
Should investors be going for gold?
Share
Next on Fin24
The rarity of guidance among SA companies

See all newsletters
Voting Booth
How has Covid-19 impacted your financial position?
Please select an option Oops! Something went wrong, please try again later.
I'm not really directly affected
18% - 1655 votes
I am taking a hit, but should be able to recover in the next year
23% - 2176 votes
My finances have been devastated
34% - 3233 votes
It's still too early to know what the full effect will be
25% - 2355 votes
Previous Results
Covid-19 Money Hub
Covid-19 Money Hub - answering your business and money questions during the crisis