South Africa’s largest distiller, Distell, has seen its share price gain 39% over the past 30 days as investors adjusted their sentiment towards alcohol-related producers. Distell had been trading sideways between 6 640c/share and 8 900c/share since March.

It formed rising bottoms within the sideways pattern, after Distell announced in August that its full-year results showed resilient performance in Africa, despite the impact of Covid-19.

Outlook: Although the group lost approximately 100m litres in sales volumes and R4.3bn in revenue due to the lockdown, and dividends were temporarily suspended, the group positioned itself well for a recovery during the lockdown period. Rather than cutting jobs, salaries were reduced. The easing in agricultural export regulations under level 4 allowed Distell to process about R440m worth of open orders. The group is confident in the way it’s managing the business, and aims to remain flexible and recession-proof by focusing on the price points of its diversified portfolio of brands.

On the charts: Distell has breached the resistance level of its sideways pattern at 8 900c/ share – rapidly testing prior resistance levels. Continued upside could see Distell retest its all-time high at 14 980c/share in the short term. 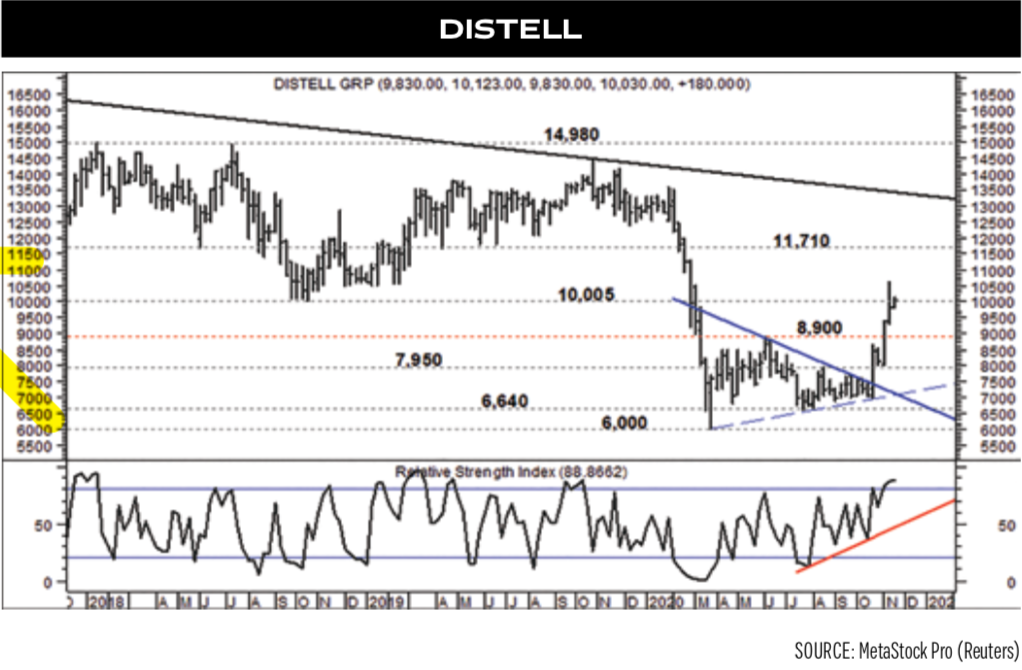 Could be ending a nine-month consolidation

Telkom’s share price leaped during the first week of November after the fixed- line operator announced that it was expecting to report an increase in headline earnings of 15% to 25% for the half-year ended 30 September. A week later, the company reported a 25.4% jump in headline earnings per share – driven by its mobile offering.

Outlook: Telkom lost all its previous gains and tested a low at 1 325c/ share in March this year. It then traded sideways between 2 210c/ share and 1 770c/share for two months, before regaining upside through the resistance trendline of its bear trend (blue bold trendline). Currently trading out of its bear trend, Telkom is attracting investors again. It had confirmed a positive breakout above 3 185c/share in June, but pulled back from an overbought position on the weekly chart.

On the charts: After holding firmly at 2 210c/share, Telkom regained upside momentum and has traded through the 3 185c/share key resistance level again. Expect further gains through 4 605c/share towards 5 825c/share if current bullish sentiment should persist.

Go long: A buy signal has been triggered above 3 185c/share. However, with the 3W RSI currently overbought, a near-term correction is on the cards. If another rising bottom forms above 2 855c/share – thus retaining the current uptrend – go long. Increase long positions on continued upside through 4 605c/ share, as further gains towards 5 825c/share would be possible in the short to medium term.

Go short: A reversal below 2 855c/ share would mark a false break through 3 185c/share – the current uptrend would end – potentially attracting selling towards support at 2 210c/share. In this instance, refrain from going long. Moxima Gama has been rated as one of the top five technical analysts in South Africa. She has been a technical analyst for 12 years, working for BJM, Noah Financial Innovation and for Standard Bank as part of the research team in the Treasury division of CIB.

We live in a world where facts and fiction get blurred
In times of uncertainty you need journalism you can trust. For only R75 per month, you have access to a world of in-depth analyses, investigative journalism, top opinions and a range of features. Journalism strengthens democracy. Invest in the future today.
Subscribe to News24
Related Links
Killer Trade | Technical analysis of Curro and Stadio
Killer Trade | Technical analysis of Cashbuild and Motus Holdings
Fund in Focus | Seeking returns in offshore property
Next on Fin24
Giving a voice to landlords and property managers

See all newsletters
Voting Booth
Have you claimed the interest on your rental deposit?
Please select an option Oops! Something went wrong, please try again later.
Yes, and I've gotten it.
21% - 1078 votes
No, I did not.
52% - 2708 votes
My landlord refused
28% - 1469 votes
Previous Results
Covid-19 Money Hub
Covid-19 Money Hub - answering your business and money questions during the crisis