The dangers of printing money Modern monetary theory, or MMT as it is often called, is a new term for an old idea. Its proponents argue that a state, which issues fiat money does not have to resort to taxation and borrowing to pay its bills. It can fund itself simply by printing money.

While there are numerous historical examples of unfunded fiscal spending being followed by hyperinflation and economic collapse, the modern supporters of what would previously have been regarded as economic heresy, say this time it is different.

The simple truth is that central banks in the US, Europe and Japan have been applying the precepts of MMT for the past decade and in responding to the Covid-19 pandemic have abandoned any sense of traditional financial prudence.

The US Federal Reserve (the Fed) has been  the most aggressive, increasing its balance sheet from $4tr to $7tr over the three months following the market meltdown in March. Most of this $3tr of new money has been used to fund an exploding federal fiscal deficit.

The balance sheets of the Fed, European Central Bank and Bank of Japan have collectively increased by $6.3tr this year. MMT has arrived almost by accident. Its longer-term unintended consequences pose a grave risk to the financial stability of the global economy.

For centuries, a golden rule of public finance has been that a state should live within its means. Fiscal spending should not exceed sustainable tax revenues and prudent borrowing. The wisdom of this precept was confirmed when governments tried to sustain economic growth by Keynesian deficit spending into the recession triggered by the first oil price shock in 1973.

The consequence was damaging inflation, which was only brought under control in the early 1980s when the Fed raised dollar interest rates to levels that caused a serious recession. Following this bad experience, financial prudence again became the guiding principle of public finance.

In recent years, in many countries the political leadership has become increasingly restive about the constraint on government spending imposed by what generally have been regarded as prudent targets for fiscal deficits and the appropriate stock of government debt relative to GDP.

This is not restricted to the political left, which usually favours increased expenditures. In the US, the Republican Party has pushed through major tax cuts and in the UK, Prime Minister Boris Johnson has abandoned Margaret Thatcher’s legacy of fiscal conservatism.

Usually the justification offered is pressing need, for example to combat climate change, to meet the growing cost of healthcare as the population ages, renovating ageing infrastructure and expenditures to address poverty. The argument against these expenditures has been that, however desirable, they are unaffordable.

It seems to give the lie to the idea that public spending must not exceed available resources. Politics is like water. It flows downhill by the easiest path. The rapidly developing habit of using central banks to finance governments is going to be difficult to break. MMT is a dangerous drug to which political elites can easily become addicted.

The developed economies of the northern hemisphere can pursue imprudent fiscal policies because in the current deflationary environment they can get away with it, at least in the short term. They have large, diverse and robust economies. In the case of Europe and Japan, they have external surpluses, so are less vulnerable to capital flight.

The US enjoys the inordinate privilege of the dollar being the world’s reserve currency. Even though in all likelihood these nations are creating serious problems for the future, they have the freedom to be irresponsible without immediate adverse consequences. The same does not apply to emerging markets and, in particular, does not apply to South Africa.

SA’s immediate problem is a paucity of domestic savings. In recent years we have been trapped in economic stagnation. There is widespread agreement that escaping from this unhappy situation will require increased investment by productive enterprises.

Unfortunately, our fiscal deficit has grown so large it is currently consuming our national savings in their entirety and even on the most optimistic projections threatens to crowd the private sector out of domestic capital markets for years to come.

Foreigners who invest in emerging markets are particularly neurotic about governments that are unconventionally imprudent. They wish to avoid investing in a country that will become the next Zimbabwe, Venezuela or Argentina. Among the warning signals that would prompt instant capital flight is funding the government through the central bank by printing money.

If SA started doing this, an exodus of capital would make financing its fiscal deficit more difficult and expensive. Even the dollar has weakened 8% following the Fed’s massive creation of money earlier this year. The rand would be much more vulnerable. There is a lot of foreign money in SA, including about R500bn in government bonds, the owners of which could panic.

The rand would weaken with inflationary consequences, which would force the Reserve Bank to increase interest rates. While there would be immediate short-term costs, even more damaging would be the long-term consequences of exclusion from international capital markets. Who in their right mind would invest in a country, which is adopting the policies that bankrupted Zimbabwe?

While funding SA’s fiscal deficit is a formidable challenge, we do not have the freedom to copy developed economies and print the money. To do so would make matters even worse. MMT is not for us.

Read more
This article originally appeared in the 5 November edition of finweek. You can buy and download the magazine here. 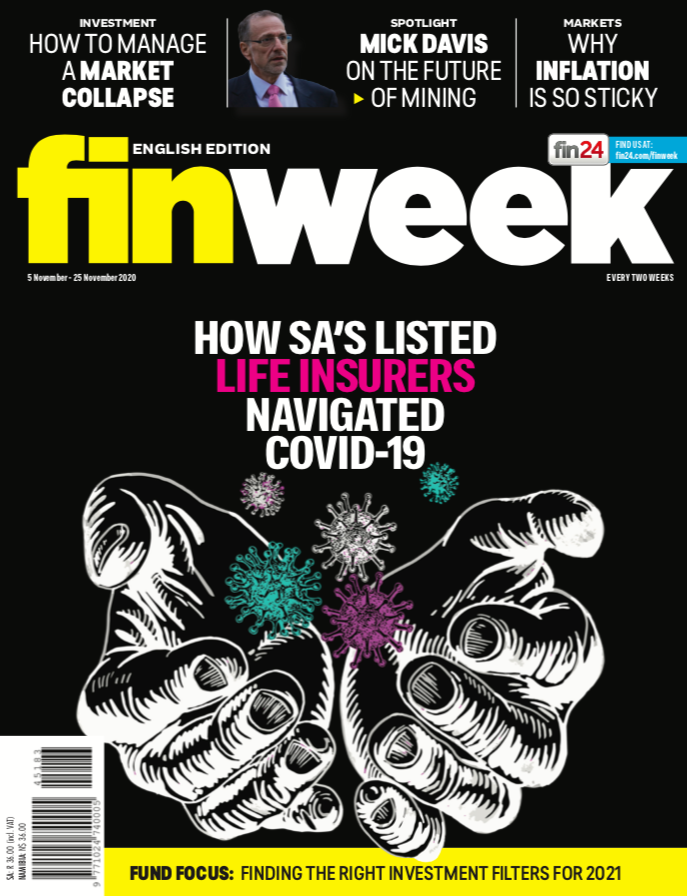 We live in a world where facts and fiction get blurred
In times of uncertainty you need journalism you can trust. For 14 free days, you can have access to a world of in-depth analyses, investigative journalism, top opinions and a range of features. Journalism strengthens democracy. Invest in the future today. Thereafter you will be billed R75 per month. You can cancel anytime and if you cancel within 14 days you won't be billed.
Subscribe to News24
Related Links
How to handle the shock of a market collapse
How to avoid five investment mistakes, especially in uncertain times
How to spot a financial bubble
Next on Fin24
COVER STORY | The metals rush