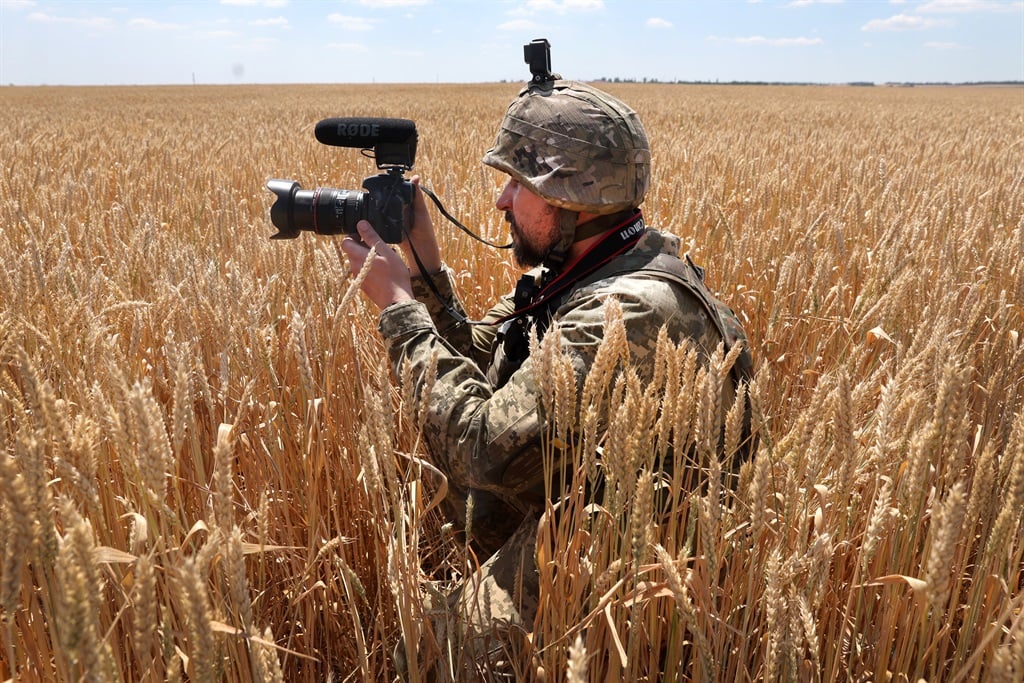 A Ukrainian military journalist takes cover in a wheat field as he captures video while a tank team with the 14th Mechanized Brigade of Prince Roman the Great fire on an enemy position on 1 July in the Donetsk District, Ukraine.
Scott Olson/Getty Images

The African Union (AU) on Saturday hailed a landmark deal between Ukraine and Russia that will allow Kyiv to resume exports of grain through the Black Sea and relieve a global food crisis.

Ukraine's farms are a major source of grain for the world market, in particular in the Middle East and Africa, where food supplies are critically tight.

Cereal prices in the world's poorest continent have surged because of the slump in exports, sharpening the impact of conflict and climate change and sparking fears of social unrest.

"The Chairperson of the African Union Commission Moussa Faki Mahamat welcomes the signing by Russia and Ukraine of agreements," a statement said, praising Senegalese leader and AU chair Macky Sall "for having called for the urgent need for the resumption of cereals from Ukraine and Russia to global markets as made to President Vladimir Putin during a joint AU mission to Sochi" in early June.

Ukraine and Russia and two of the world's largest grain producers.

But Ukrainian mines laid across the Black Sea to avert an amphibious assault, as well as Russian warships, have blocked exports from Ukraine, leaving up to 25 million tonnes of wheat and other grain in danger of rotting in ports and silos.

Sall thanked Turkish President Recep Tayyip Erdogan, who oversaw the signing ceremony in Istanbul on Friday, as well as presidents Putin and Volodymyr Zelensky of Ukraine.

"This was the objective of the mission I led in Sochi on June 3," Sall tweeted.

The International Rescue Committee, which helps people affected by humanitarian crises, also welcomed the accord, saying countries in East Africa relied "on Russia and Ukraine for over 90 percent of their wheat imports".

"The lifting of these blockades will go some way in easing the extreme hunger that over 18 million people in East Africa are facing, with three million already facing catastrophic hunger conditions," Shashwat Saraf, IRC's East Africa emergency director, said.

We live in a world where facts and fiction get blurred
In times of uncertainty you need journalism you can trust. For 14 free days, you can have access to a world of in-depth analyses, investigative journalism, top opinions and a range of features. Journalism strengthens democracy. Invest in the future today. Thereafter you will be billed R75 per month. You can cancel anytime and if you cancel within 14 days you won't be billed.
Subscribe to News24
Next on Business
France plans fashion revolution with climate-impact labels