Brexit: Nerves in London at prospect of a 'no-deal' 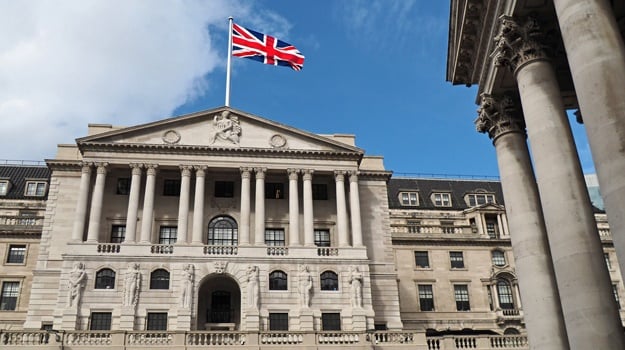 The Bank of England, where most risk is centred, is bracing for the end of the transition period on December 31. (iStock)

Britain's financial sector is watching nervously as the prospect mounts of a "no-deal" Brexit, stoking fears of lost clients and influence in key areas, as well as market turbulence.

The Bank of England, where most risk is centred, is bracing for the end of the transition period on December 31, with no sign of a free-trade agreement between the European Union and Britain. The central bank said a "no-deal" result could lead to "some market volatility and disruption for financial services, particularly to EU-based clients".

Investment bank Morgan Stanley is predicting a 6% to 10% fall in the FTSE-250 index and a 10% to 20% drop in banking stocks, which have already been hit by the coronavirus.

From January 1, Britain's financial sector and the City of London financial district will lose a European "passport" that allows it to sell products and financial services across the EU.

"The City" is also worried about talk of an "equivalence" regime of compatible rules that in theory would keep the financial taps running but in practice could be easily revoked. The EU has already given the go-ahead for derivatives clearing houses, which underwrite more than trillion dollars in transactions every day.

But it has not yet said it will do the same for trading, which accounts for hundreds of billions of pounds every day.

Banks and financial institutions have taken technical measures to ensure smooth transactions in case bilateral talks fail and governments on both side of the Channel legislate, to ensure continuity in insurance or asset management contracts.

"If the UK and EU have a more acrimonious relationship, it could take longer to get these equivalence decisions," said Sarah Hall, from the UK in a Changing Europe think-tank.

Britain left the EU in January and has been in a standstill period until the end of this month while both sides try to agree the terms of their new relationship.

But a large number of British financial institutions have already set up or expanded teams and offices in Amsterdam, Frankfurt and Paris to keep working.

According to the Ernst & Young consultancy, 7,500 of the more than 500,000 people who work in The City have already relocated. EY said finance companies have also transferred more than £1.2 trillion (US$1.6 trillion) in assets to the EU since Britain's referendum on EU membership in 2016.

In the event of a "cliff-edge" divorce with London, the European Commission could complicate life for British subsidiaries by asking them for more equity or to transfer additional staff before granting a business licence. Transfers of personal data could also be problematic because the Commission has not yet validated UK data protection standards.

Banks and investment firms could choose to comply, but any move could be complicated further by travel restrictions imposed because of the coronavirus outbreak. Otherwise, they could give up certain clients or activities that would become just too costly or risky, said Simon Gleeson, from law firm Clifford Chance.

Economies, including Britain's, have been battered by the global pandemic, which has created a difficult trading environment of low or negative interest rates.

"This would play out entirely differently if the banking industry was profitable and had surplus capital," he added.

Some have already closed the accounts of British nationals living in the EU, in a move affecting tens of thousands of people, but that process could widen further.

The derivatives market could be particularly affected.

London is the global capital of the complex but vital financial instrument, which traders buy to insure themselves against sudden interest or currency exchange rate swings.

The Bank of England on Friday said UK banks remained "resilient" to the risks of Brexit and the coronavirus. But it warned that some EU-based firms might face problems providing cross-border services, and vice versa. That could result in an exodus of derivatives brokerage activity to other jurisdictions, particularly Wall Street, it added.

All this comes at a time when European financial services legislation is largely based on the British model.

British regulators insist they want to maintain a "robust" level of financial standards and not engage in regulatory "dumping", which Europe fears.

On the other hand, said Clifford Chance's Gleeson, "the biggest single concern on both sides is whether what is happening is going to have the effect of loosening the regulatory oversight".

If that happens, it will become more fragmented and less able to combat fraud or dangerous market behaviour, he added.

We live in a world where facts and fiction get blurred
In times of uncertainty you need journalism you can trust. For 14 free days, you can have access to a world of in-depth analyses, investigative journalism, top opinions and a range of features. Journalism strengthens democracy. Invest in the future today. Thereafter you will be billed R75 per month. You can cancel anytime and if you cancel within 14 days you won't be billed.
Subscribe to News24
Related Links
WATCH | Boris Johnson: Very, very likely UK will fail to strike trade deal with EU
Sterling deepens losses to drop by 1% on Brexit remarks
European markets shattered by dwindling Brexit deal hopes
Next on Fin24
MONEY LIVE | Rand strengthens by 2% as dollar loses steam after weeks-long rally