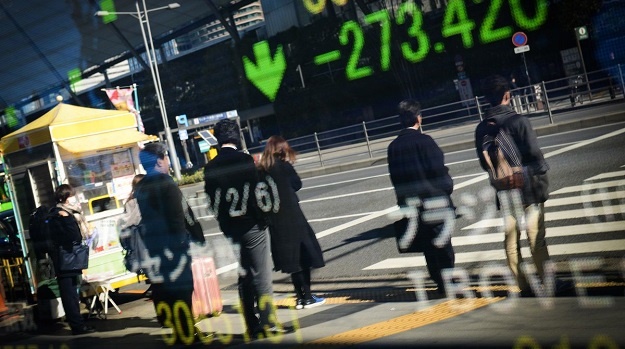 Pedestrians are reflected in an electronic stock board outside a securities firm in Tokyo, Japan, on Tuesday, Feb. 6, 2018. Photographer: Noriko Hayashi/Bloomberg

The JSE opened marginally softer on Wednesday but sunk deeper into losses as European counters traded under pressure.

The outlook was rather mixed for global markets in today's session as the Nikkei managed to advance 2.13% while the Hang Seng and Shanghai Composite Index lost 1.17% and 0.47% respectively.

Stocks in Europe fell on the back of concerns that the bloc was not moving fast enough to inject monetary stimulus to counter the impact of the pandemic. In the US equity futures traded softer earlier on, but they managed to turn green on the back of a wave of optimism that there would be more stimulus injected into the economy.

Locally, there was some disappointment in terms of economic data following the release of the SACCI business confidence data for March. The index fell to 89.9 from a prior level of 92.7. The rand was not affected by this as it continued to strengthen primarily on the back of US dollar weakness. The local unit was trading 0.57% firmer at R18.19/$ at 17:00.

Financials came under pressure despite the firmer rand. Declines were recorded for Standard Bank [JSE:SBK] which lost 6.96% to close at R106.18, FirstRand [JSE:FSR] which fell 4.99% to close at R37.70, and Momentum Metropolitan Holdings [JSE:MTM] which closed at R15.41 after losing 4.76%. The JSE All-Share index eventually closed 1.7% weaker while the JSE Top-40 index lost 1.88%. The financials index was the biggest casualty as it fell 3.81%, while the industrials and resources indices lost 1.03% and 1.97% respectively.

Brent crude was mildly weaker as it was recorded trading 0.28% weaker at $31.77/barrel just after the JSE close.

We live in a world where facts and fiction get blurred
In times of uncertainty you need journalism you can trust. For only R75 per month, you have access to a world of in-depth analyses, investigative journalism, top opinions and a range of features. Journalism strengthens democracy. Invest in the future today.
Subscribe to News24
Next on Fin24
Stocks remain upbeat as virus cases decrease

See all newsletters
Voting Booth
Should government have assigned a majority shareholding in SAA to the private sector?
Please select an option Oops! Something went wrong, please try again later.
Yes, It's a good decision
70% - 546 votes
Not a good move
8% - 65 votes
Too early to tell
22% - 168 votes
Previous Results
Covid-19 Money Hub
Covid-19 Money Hub - answering your business and money questions during the crisis