* Sign up to Fin24's top news in your inbox: SUBSCRIBE TO FIN24 NEWSLETTER
Live News Feed
Go to start

The rand closed 0.20% weaker at R14.18/$ ahead of the release of the US Federal Reserve Bank's September meeting minutes expected on Wednesday evening.

The main positive contributors to growth came from the textiles, clothing and footwear and leather goods category. Investec economist Lara Hodes shared views in a report that the retail sales sector could make a modest contribution to third quarter GDP, barring a "large slide" in September figures.

Further abroad US stocks fell due to disappointing earnings by corporates, the pound and euro both weakened on the back of inflation figures for the respective regions.

Investor enthusiasm for pot stocks cooled as Canada’s legalization went into effect. However, the declines only brought most of the stocks to their lowest levels in a week, given the sector has been on a tear since mid-August https://t.co/OROzwHM5jF pic.twitter.com/daawvCFDl2

Cannabis stocks were off to a shaky start in pre-market trading on Wednesday, hours after Canada’s legalisation of adult use went into effect.

In early afternoon deals, Frankfurt and Paris stocks both sank, despite gains in Asia and on Wall Street on upbeat US company earnings.

The USDZAR has scope to trade towards 14.32 in the near term if prices can keep above 14.20, says Lukman Otunuga, FXTM research analyst.

Stocks in Asia were broadly higher today after upbeat US corporate earnings and encouraging economic data elevated Wall Street overnight. Some semblance of stability is likely to return to financial markets this week as earnings season offers investors a short-term distraction away from trade tensions and global growth fears.

Although robust earnings are poised to instill equity bulls with a renewed sense of confidence, the underlying factors weighing on stock markets remain present.

With US-China trade disputes, concerns over plateauing global growth, Brexit-related uncertainty, geopolitical tensions and prospects of higher US interest rates still in the mix, equity bears have plenty of ammunition.

With just over five months left until the official Brexit deadline, markets and investors are still scrambling for clarity with many questions still unanswered.

Over the next few days investors will be keeping a very close eye on the EU summit which could provide some direction on Brexit. With a deadlock on the Northern Irish border issue seen as a major obstacle in Brexit talks, there is little hope for a breakthrough at the EU summit.

If the summit concludes with no real progress made on negations, this simply raises the risk of a no-deal Brexit outcome.

Given the pound is extremely sensitive to Brexit headlines, such a scenario could send the currency collapsing like a house of cards.

Dollar gains ahead of FED minutes

Buying sentiment towards the dollar took a slight hit on Tuesday after Donald Trump once again criticised the Federal Reserve, stating that it was his "biggest threat" because it is raising rates too fast.

However, the dollar’s downside was limited by positive US industrial production figures which boosted sentiment towards the US economy.

Although Trump’s repeated criticism of the Fed is unlikely to impact the central bank’s interest rate hiking path, it could continue weighing on the dollar. Today’s main event risk for the dollar will be the Federal Open Market Committee meeting minutes which investors will closely comb through for clues on rate hike timings beyond December.

The dollar could be given an opportunity to rebound if the minutes come across as more hawkish than expected. The dollar index has staged an impressive rebound from the 94.80 level with prices trading towards 95.20 as of writing.

Bears need to break below the 95.00 support level for prices to sink towards 94.60. Alternatively, an intraday breakout above 95.30 could trigger a move higher to 95.44.

Oil prices seem to be witnessing some stability as US-Saudi tensions ease with investors redirecting their focus towards looming sanctions against Iran and a surprise decline in US Crude inventories.

Although the current market conditions favour higher oil prices, global trade tensions still remain a threat to oil bulls down the road. Heightened trade disputes between the world’s two largest economies represent a threat to global growth. Slowing global growth in the event of a full-blown trade war will most likely dent demand for crude.

Excluding the Argentinian Peso and Turkish Lira, the ZAR has lost the most ground as stated by Bloomberg. The rand held its ground following the release of August retail sales data.

Statistics South Africa released the figures at 13:00, which reflected a 2.5% year-on-year increase.

Analysts from NKC Economics had expected a decline of -0.5%.

The major contributors to the increased sales in August were household furniture, appliances and equipment which increased by 10.4%; textiles, clothing, footwear and leather goods (up 6%0, and pharmaceuticals and medical goods, cosmetics and toiletries (up 3.1%).

Bloomberg reports that after a period of relative calm following the election of Cyril Ramaphosa as president of South Africa, the rand’s historical volatility is reasserting itself. Actual price swings in the rand in the past six months have been wider than the average during his predecessor Jacob Zuma’s nine-year, scandal-ridden reign, and are now the highest of any emerging-market currency except Argentina’s peso and Turkey’s lira. The rand has shed 15 percent since Ramaphosa took office. The shiny metal is in the middle of a surprise advance, posting the fastest rally since the Brexit vote as a surge in haven demand combines with seasonal buying. The sudden snap of its unlucky streak - bullion has declined every month since April - blindsided fast-money investors, but that could be good for gold bugs. READ: Here’s the bullish case for the yellow metal in charts as well as one big, fat caveat

The JSE Top-40 index gave up 0.06% in early trade, lagging a more than 2.2% surge in US equities overnight and strong gains in Asia.

Mediclinic was the biggest loser, giving up 17.71% to R73.24 following an interim trade update.

AFP reports the dollar was down against most high-yield and emerging market economies as traders came out of their shells after recent selling.

Ray Attrill, head of forex strategy at National Australia Bank, suggested US President Donald Trump's latest outburst against the Fed's rate hikes, which he claims are excessive, were weighing on the dollar.

"While such name calling shouldn't mean anything in terms of what the Fed actually does, it is a factor which somewhat undermines sentiment towards the dollar," he said."We'd argue, (it) is a contributory factor, albeit minor, to recent poor performance of the US dollar in the face of first higher US yields, then last week's sharp turn for the worse in US equity market."

It’s a perfect 10. Every one of the world’s 10 richest people added at least $1bn to their fortunes as US stock markets ripped higher, brushing off last week’s malaise. What South Africans are waking up to

Equities in the US and Asia have bounced off recent lows after major US companies showed upbeat earnings reports.

The bounce in equities has stopped the recent momentum in gold as the safe-haven asset dropped back to as low as $1 221.00 after topping around $1 233.00 yesterday.

The ZAR was on its own warpath yesterday being the strongest EM as it traded back below 14.20 which were levels last seen towards the end of September.

The USD is on the front foot this morning and could likely look to regain some lost ground against the EMs.

Bias on the rand remains stronger

The rand benefited yesterday from surging stock markets worldwide, taking its cue from the Turkish lira which hit a two-month high against the dollar.

Paul Muller, Corporate Treasury Manager at Peregrine Treasury Solutions says the dollar remains on the back foot against all major currencies, still reeling from the release of sluggish retail sales figures, while emerging markets enjoyed a good day as risk-on trading resumed in the market.

"Today will see the release of local retail sales figures, as well as US housing starts data and Federal Reserve minutes. Asian markets staged a much-needed rally on Wednesday as investors tracked Wall Street's best performance in more than six months thanks to a healthy round of earnings reports.

However, "perhaps a bit surprising is that local equity markets are not exactly knocking it out of the park this morning".

"I suspected they would take their lead from the US equity froth. But again, local dealers remain a better seller of risk until a definitive shift in US-China trade tensions is offered up," said Stephen Innes, head of Asia-Pacific trade at OANDA.

Wall Street stocks surged higher as a batch of strong earnings reports pushed aside lingering doubts about the economy and trade fights that have pressured markets. Locally the JSE closed firmer and the rand broke below R14.20 to the US dollar. 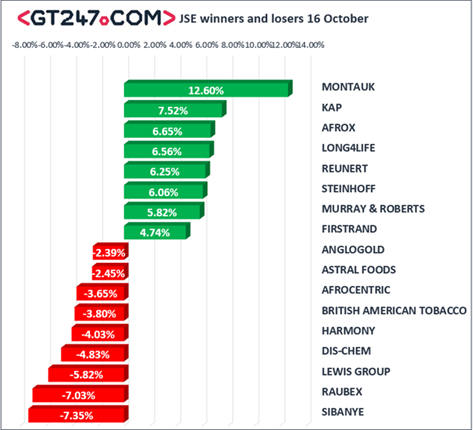