Whether trader or investor, analyst or observer, Monday in markets looks like one to tell the grandchildren about.

An oil price war has broken out in the middle of a worsening global virus outbreak, and it has triggered asset moves around the world that in some cases have never been seen before. Crude itself at one point dropped by a third. Treasury yields fell to unprecedented levels across the curve. U.S. stocks dropped so hard trading was halted.

On a historic day, here’s a look in more detail at some of the biggest moves:

The all-out price-war among the world’s biggest producers crashed oil markets by about a third earlier. They pared declines, but were still down about 17% as of 12:14 p.m. in New York. Crude futures suffered the second-largest decline on record in the opening seconds of trading in Asia, behind only the plunge during the Gulf War in 1991. Brent for May settlement tumbled as much as $14.25 a barrel to $31.02. West Texas Intermediate crude for April slumped as much as 34% to $27.34 a barrel. 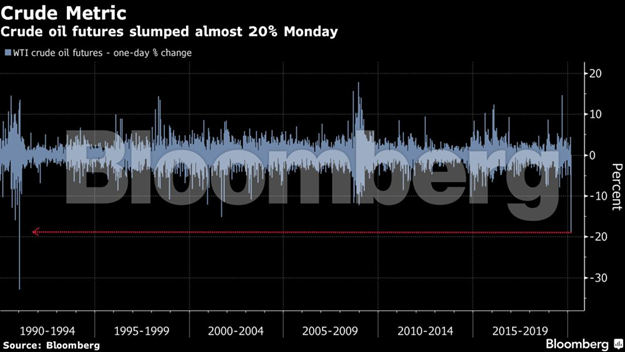 The severe rout in US stocks triggered trading curbs that the New York Stock Exchange put in place after the 1987 Black Monday crash. A 15-minute trading halt took hold after the S&P 500 Index fell 7% to 2,764.21 as of 9:34 a.m. in New York, triggering the breaker for the first time since December 2008 at the depths of the financial crisis. The cost to protect US investment-grade debt against default surged by the most since Lehman Brothers declared bankruptcy in the height of the 2008 global financial crisis. Dozens of energy bonds plunged by double digits, the latest hit in a grim few weeks for junk-rated companies in the industry. US Treasury yields plunged, with the rate on 30-year bonds diving as much as 59 basis points, as rising expectations the Federal Reserve will cut policy rates to 0% in the coming months drove investors to reach to longer maturities for yield. Monday’s plunge in equities has pushed a number of major European stock benchmarks into bear market territory, with losses exceeding 20%. Italy’s FTSE MIB has been the most hit, down more than 25% from a high reached last month. Currencies of energy exporters were quickest to react to the oil plunge. The Norwegian krone fell to its lowest since at least 1985 versus the dollar and the Mexican peso dropped to a more than three-year low. The yen jumped to its strongest level against the dollar since 2016 as investors sought shelter. As of Sunday, about half of the world’s countries have cases of Covid-19 and Italy’s virus deaths rose by 57%. Japan’s currency was up almost 3% against the greenback. The Cboe Volatility Index surged to the highest since 2008 on Monday as a plunge in oil prices frazzled traders already on edge over the coronavirus. The VIX, which measures the 30-day implied volatility of the S&P 500 based on out-of-the-money options prices, jumped as high as 62, its highest level since December 2008 on an intraday basis. We live in a world where facts and fiction get blurred
In times of uncertainty you need journalism you can trust. For only R75 per month, you have access to a world of in-depth analyses, investigative journalism, top opinions and a range of features. Journalism strengthens democracy. Invest in the future today.
Subscribe to News24
Related Links
More than R45 billion wiped off Sasol in a single day
Oil crash: Saudi Arabia's risky price war
Volatile rand makes an about-turn, strengthening more than 2%
Next on Fin24
MONEY LIVE | Pepkor sees flat turnover, cellphone sales take a knock