I get many questions from investors wanting to know where the rand will be by the end of 2020. Usually they also ask what is going to happen to the JSE and international stock markets.

It is impossible to predict the direction of any market and it is especially difficult to do this in a time of massive uncertainty and change. Making confident predictions that the rand will collapse or the JSE will implode would be a foolish thing to do. The truth is that no one knows.

However, we can try to understand what moves our markets and that will help us to determine the value of the JSE and the rand in the next few years.

Rmerging markets have had a bad time

I always find it interesting how some people explain the bad performance of the JSE as if it is an isolated island. They look for very simplistic explanations such as Zuma's terrible presidency, bad economic policies or labour market rigidity. 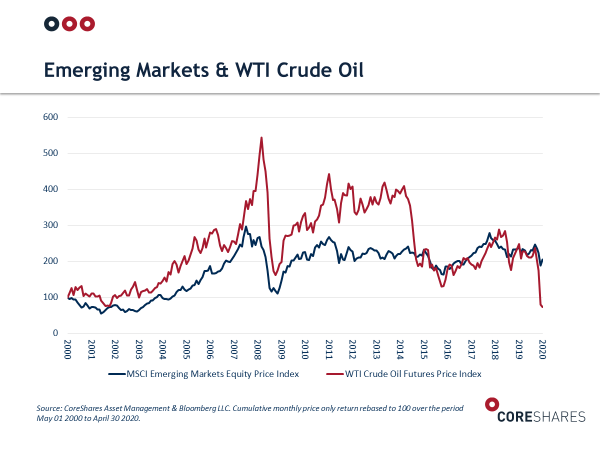 My observation is that EM stock markets tend to rise strongly when the price of oil rises, and they also tend to fall sharply if oil prices collapse. It is also clear that Emerging Markets can rise without the oil price rising.

It is important to note that global investors are not always particularly concerned with the dynamics of individual Emerging Markets. If they decide that the world is in a state of recovery, they tend to buy EM markets in proportion to their size. This is a critical point because it means that the sustained selling pressure that the JSE has experienced over the last decade might reverse.

I also think that the JSE has had to deal with the constant threat of a ratings downgrade that caused more international investors to sell shares rather than buy. As the downgrade has happened, it has cleared out this selling pressure and opened the doors to different investors who will benchmark SA against other "junk" countries. Naturally, investors will avoid the JSE if our economic policies remain unfavourable. Any material structural reforms are likely to increase the buying pressure on the JSE.

What happens in New York matters

One of the big factors that will improve global investors' appetite for risk is what happens in the US economy and their stock market.

I am worried that the US stock market is expensive after recovering from the sharp sell-off of February and March. If investors become skittish about Covid, a Cold War with China or the US economy, it is likely to cause the US markets to drop again and this will be negative for all Emerging Markets including the JSE.

This is not a reason to avoid EM shares as I believe there is great value in EM shares. If we see a slight recovery in the global economy and optimism about a Covid-19 vaccine, it will be positive for EM shares. I would be allocating a portion of my money to EM around the world. I remain cautious on the rand/dollar; I think the rand can easily recover to R17.00 and I would consider sending a portion of my money out whenever the rand is below R17.50 to the Dollar.

In summary, I think the opportunity for the next decade will be global Emerging Markets. That does not mean you should invest all your money in Emerging Markets now and expect a massive return in the next few months.

I think the world is going to be digesting the economic effects of Covid-19 for another 24 months. That means you can make gradual changes and realign your investments over time – big moves in volatile times are often a way to lose money.

As a final note, I would ignore the "futurists" who tell us about how the whole world is going to change after Covid-19. No one knows what will happen and human beings rarely change their behaviour in a radical way unless they are forced. Take time to watch the story unfold, it is going to take years, not weeks.

Related Links
Sifiso Ntombela | If farmers want to attract investment, ESG is the key
OPINION | What Wayde van Niekerk teaches us about investing
MONEY CLINIC: Is it worth investing in a living annuity during the time of Covid-19?
Share
Next on Fin24
READ IN FULL | Budget breaks President Ramaphosa’s promise - economists' letter to MPs

See all newsletters
Voting Booth
How has Covid-19 impacted your financial position?
Please select an option Oops! Something went wrong, please try again later.
I'm not really directly affected
18% - 1536 votes
I am taking a hit, but should be able to recover in the next year
23% - 2000 votes
My finances have been devastated
34% - 2991 votes
It's still too early to know what the full effect will be
25% - 2174 votes
Previous Results
Covid-19 Money Hub
Covid-19 Money Hub - answering your business and money questions during the crisis