One can safely conclude that language plays a critical role as a driver throughout the language economic value chain, says Christo van der Rheede.

Without language, there cannot be any economy! On a daily basis, people use language to do transactions. They produce and buy from each other. All kinds of economic activities driven by supply and demand, are transacted through language. Language enables people to define and determine each other’s economic expectations and what is required to fulfil it.

At an informal or personal transactional level, language plays a very intimate role to conclude basic economic transactions. In this context, the expectation is that everyone stays true to their word.

A business transaction serves as an oral promise to deliver on. In an informal setting, a taxi driver will converse in a language his potential clients can associate with. The price, the distance, and all other questions will be answered in a language that is clearly understood by all. At a basic level, language plays a critical role in driving a wide array of informal economic activities.

If you take it to the next level, where language is used as a medium to conclude more advanced economic transactions, it plays a critical role in the planning, production, marketing and selling of products or services. At various levels of this economic process, a need may arise to draw up contracts. A contract outlines the terms and conditions which is understood by all parties. If any of the parties fail to honour a contractual commitment, the aggrieved party can seek relief through the judicial system.

Language, however, is not limited to informal or formal business transactions, it can also be translated into a product or an actual service. A wide variety of language products are available in the publishing, entertainment, educational, information technology, advertising and language pathology sectors.

Newspapers, for example, are written in a particular language aimed at a particular language community. Many jobs are created in the process, because a wide variety of skills sets are required to produce a newspaper. It includes journalists, editors, photographers, advertisers, marketers, etc. A newspaper with a high number of readers, attracts various advertising agents who seek to use the newspaper as a platform to market specific products.

Language, in the context of the education sector, is not only used as a means of instruction or transferring knowledge, but it is also used to develop textbooks and other educational tools.

Textbooks are written in a particular language so that learners can be educated in that specific language. Furthermore, it is important to note that textbooks and all other educational tools serve not only an educational purpose, but it is also developed with a profit motive in mind. That is to make money and to grow the fortunes of the author, the publishing company, distributors and other role-players.

In the entertainment industry, language is used to entertain an audience or an individual customer. A film, television series or play are produced in a specific language. Screenwriters, authors, actors, editors, researchers, music score producers and other experts must speak or at least understand the language used to create a film or play. People prefer and enjoy entertainment in a language that they understand. People will hardly watch a film if they do not understand the language unless subtitles are used. Subtitles for movies have a lot of benefits and translators are used for this purpose.

All the aforementioned economic activities form part of a complex language economic value chain in which language is the primary driver for wealth creation. Economic wealth is the result of a return on investments made at various levels. Not only monetary investments, but also investments through skills transfer and personal interaction.

Language that is however limited in its use, does not offer any opportunities for wealth creation. If a language is neglected and not used as a tool of education or as a means of economic transaction, it loses its economic appeal and economic value. If the transactional value of a language is non-existent, such a language will eventually die out.

It is therefore critical that the economic or transactional value must be understood and appreciated, as well as the economic opportunities a language offers. Such opportunities must be leveraged to the extent that people can create wealth or create a living for themselves but more so, that it can lead to an improvement of their standard of living.

Can one than conclude that there is a direct correlation between the standard of living of a specific language community and their ability to transact economic activities or create products and services through their mother tongue? Their ability to leverage the economic opportunities their language offers position them as producers,

However, is the converse also true for a language community lacking in the ability to produce products and services in their mother tongue, to be mere consumers of products and services produced by other language speakers? In an environment where an international language such as English is accepted as the language of business, non-speaking English speakers are reduced to mere consumers of language products often produced in another country and imported for domestic use.

The question though who are the economic beneficiaries of such imported products? Money generated through the sales of such products will flow to the producers and other stakeholders involved in the production of such language products, often in another country. A local community or country will enjoy the benefit of consumption, but not production. Language communities that are merely consumers of imported language products, loose out in terms of real returns. Not only in terms of return on investments, but also in terms of royalties that flow out of the country.

Such returns are the outcome of investments throughout the economic value chain of a particular language. The inputs required to kickstart such an economic value chain, starts at home. And it is further enhanced by institutions such as schools, universities that must ensure that people are well trained in their mother tongue and that they understand the economic opportunities their language offers.

The value chain is divided into different parts. The production part consists of the use of language at home and at various levels of society. At institutional level, training is provided and skills transferred to access career opportunities.

The processing part is driven by various sectors that process language into different products and services. The consumption side consist of consumers that buy language products and services. To understand their everchanging needs and trends, huge emphasis is placed on market intelligence. This enables producers of language products to gain a deeper understanding of their customer’s needs and to maintain or improve their competitive edge. The profits earned through the sales of products, enable producers to reinvest and grow their market share. A myriad of jobs is created in the process. 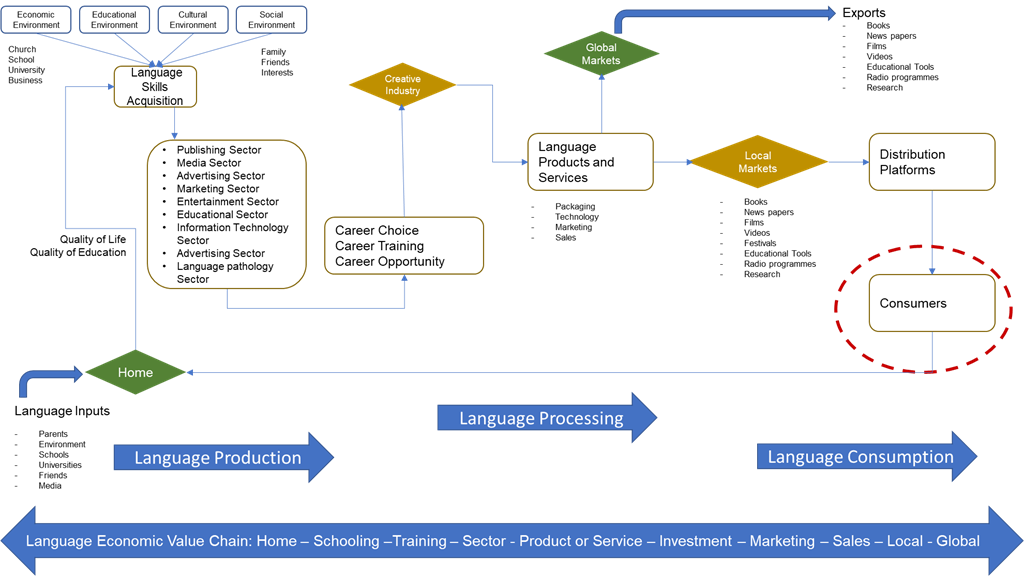 One can safely conclude that language plays a critical role as a driver throughout the language economic value chain. Language communities should take responsibility to grow that value chain. A dependency mind-set will not enable a community to leverage the economic opportunities such a value chain potentially offers. It requires hard work, community mobilisation and shared ownership.

If a language community neglects their language and fail to take responsibility, the consequences are often dire. They run the risk of remaining mere consumers and trapped in downward spiral of ever-increasing poverty and dependence. Not only at an economic level, but at an intellectual, cultural, spiritual and social level too!

Christo van der Rheede is the CEO of Agri SA and recently participated in a webinar on indigenous languages in the business sector. The event was hosted by the Pendoring Awards, Fin24, Indigenous Languages Action Forum (ILAF) and the Pan South African Language Board (PanSALB).

We live in a world where facts and fiction get blurred
In times of uncertainty you need journalism you can trust. For only R75 per month, you have access to a world of in-depth analyses, investigative journalism, top opinions and a range of features. Journalism strengthens democracy. Invest in the future today.
Subscribe to News24
Related Links
OPINION | Emigrating? Make sure you understand changes to exchange control, tax laws
OPINION | B-BBEE pioneers in a battle for survival
OPINION | Investing behaviour: It's OK to be reasonable, not just rational
Next on Fin24
IAN MANN REVIEWS | A guide for those who aren't natural born entrepreneurs