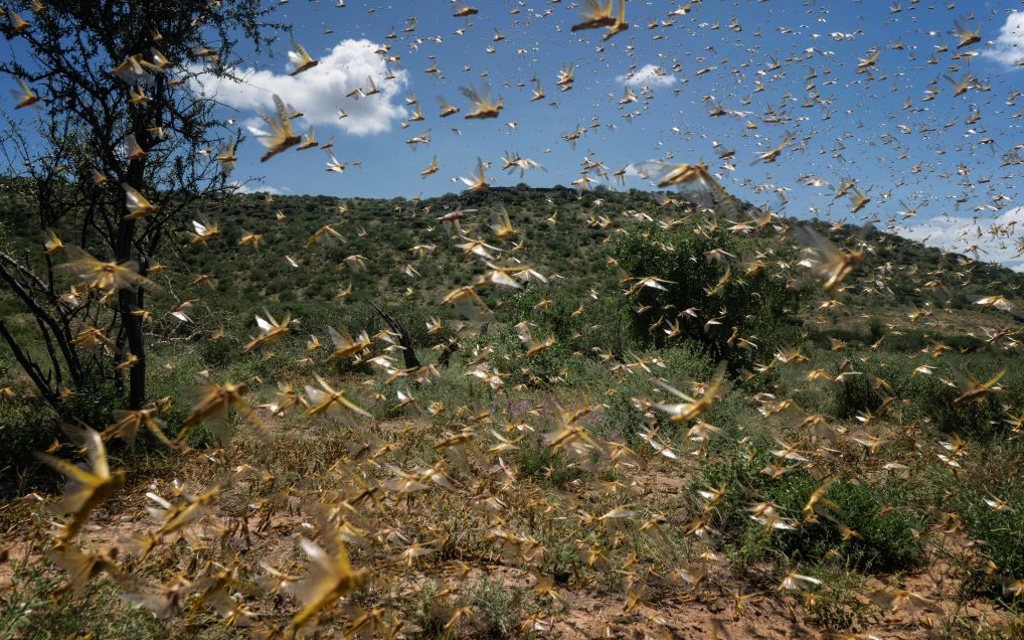 Locusts start to fly in the morning hours after roosting in the trees overnight on May 21, 2020 in Samburu County, Kenya.
Fredrik Lerneryd/Getty Images

The locusts which emerged in East Africa towards the end of last year remain a serious challenge for the agricultural sector.

This is specifically the case in Kenya, Ethiopia, Sudan, South Sudan, Eritrea, Djibouti and Somalia, according to reports from the Food and Agricultural Organisation of the United Nations (FAO). Over half a million hectares across these countries have been affected by locusts, and thus destroying crops and pastures. Hence, it is unsurprising that there are rising fears of potential food shortage if the spread of the locusts is not controlled.

These swarms of locusts caught the region by surprise as they are not a normal occurrence, with the United Nations noting that a spread this big was last seen 70 years ago. The climatic conditions are, in part, a contributor to the spread of the locusts in this region. Various reports suggest that the locusts thrive in periods after heavy rains, which is precisely the situation in parts of East Africa.

This also comes at a challenging time when the financial resources to fight the spread of the locusts are limited, as funds are diverted to fight against the coronavirus pandemic. Hence, there is the risk that if the spread is not controlled, the locusts could lay eggs, which might lead to an even larger swarm of locusts in the next season, further negatively affecting the agricultural sector and livelihoods of those mainly dependent on the sector.

The FAO estimates that roughly US$302 million is required to control the locust spread in the East Africa region.

While this swarm of locusts is a worry for the entire region, the major grain-consuming countries in this region, Kenya and Ethiopia, face slightly different prospects. Consider Ethiopia’s 2020 maize production, which is estimated at a record of 8.6 million tonnes, up by 1% y/y, according to data from the United States Department of Agriculture (USDA). This means the country’s maize fields have thus far not been as hard hit by the locusts as other countries in the region.

Most importantly, this will cover the domestic annual consumption needs.

By comparison, the USDA forecasts Kenya’s 2020 maize production at 3.4 million tonnes, down by 11% y/y. The decline, however, is not mainly caused by the locusts, rather expectations of poor yields on the back of unfavourable weather conditions at the start of the season. With Kenya’s annual maize consumption at about 4.7 million tonnes, the aforementioned production estimate means the country could require to import about 1.3 million tonnes within the 2020/21 marketing year.

For countries like Kenya, the locusts are in fact, affecting the sector in a year that staple grain conditions were not favourable. This raises the possibility that if there isn’t a strict control through applications of pesticides by spraying and other techniques, we could as well see reports of crop damages and increased import needs.

Fortunately, this year, the Southern African region has large maize supplies which should help fill the shortage in Kenya and other African countries which could experience a maize shortfall. As I have previously pointed out in Business Day, South Africa and Zambia could emerge as key maize suppliers to the Southern and East Africa region in the 2020/21 marketing year. Both countries are expecting their second-largest maize harvests on record within the 2019/20 production season (which corresponds with the 2020/21 marketing year).

Nevertheless, the key focus for the East Africa region will have to be finding financial resources to acquire all required pesticides, and various spraying equipment needed to control the spread of the locusts. This should be a priority to mitigate any potential breeding the locusts could do, which could lead to yet another outbreak next year. On a brighter side, the available maize supplies in South Africa and Zambia will help cushion the expected shortfall in the near term.

We live in a world where facts and fiction get blurred
In times of uncertainty you need journalism you can trust. For only R75 per month, you have access to a world of in-depth analyses, investigative journalism, top opinions and a range of features. Journalism strengthens democracy. Invest in the future today.
Subscribe to News24
Related Links
Wandile Sihlobo | Forecasts of bumper harvests suggest subdued food prices this year
Wandile Sihlobo | SA is bleeding jobs, but agriculture may just surprise us
Wandile Sihlobo | There’s no need to reinvent the wheel to boost growth in agriculture
Next on Fin24
Bruce Cameron | Lies, damn lies, and fake news by anti-vaxxers