Medupi and Kusile have been described as among the most expensive infrastructure of their type in the world.

They were intended to provide SA with 9600 MW of power that could have averted load shedding – flagged as a major contributing factor in the country's failure to thrive economically. They were to be megaprojects that would come online in 2012 and 2014 respectively, at a cost of R70bn and R80bn.

Any South African who had a nodding acquaintance with a newspaper over the last decade watched in despair - assuming their lights were on at the time - as that cost skyrocketed. The latest estimated costs are now over R200bn for Medupi and R230bn for Kusile.

In terms of 'failure to launch', the story of Medupi and Kusile is exemplary. According to a timeline published by Mail & Guardian in February, the two stations had – in the 2018 and 2019 financial years alone – tripped over 100 times. Medupi's unit six did not operate in September, October and November 2018.

Thousands of kilometres to the north, in 1628, a Swedish warship named the Vasa sank on its maiden journey. I say maiden journey, but this is generous, because it sank in the harbour before it even left.

"The warship survived the first blast of wind it encountered on its maiden voyage in Stockholm Harbor," writes Lucas Laursen for Archaeology. "But the second gust did it in.

"The sinking of Vasa took place nowhere near an enemy. [I]t sank in full view of a horrified public, assembled to see off their navy’s – and Europe’s – most ambitious warship to date." Sweden's high-budget mega-project went down like a lead balloon.

Although the reasons for the Vasa sinking have been debated for centuries, it's broadly understood to have been due to a handful of oddly predictable factors. So predictable, in fact, that today, there's a name for it in business used to describe expensive, poorly executed projects: Vasa syndrome.

And despite nearly 400 years passing, the cycle keeps repeating. Here are a few characteristics the Vasa shares with SA's unfortunate modern megaprojects. 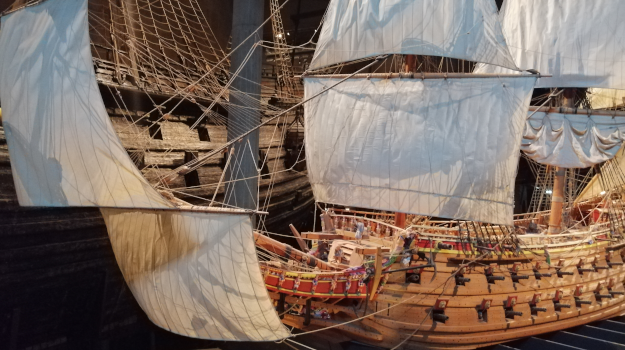 A reconstruction of what the Vasa would have looked like with its adornments attached in colour.

The Vasa was – though the king would not have said so – essentially a vanity project. It was intended to be so impressive that it would scare off all enemies before they even tried anything.

Ultimately it just inspired centuries of debate over the degree of incompetence.

Medupi and Kusile were intended to stave off load shedding. But by the time the 2018 bouts of load shedding had become a regular occurrence, their underperformance was actively being blamed for it.

The Vasa, when you see it up close, is spectacular. It stands over 50m high and, thanks to the brackish water in the Stockholm harbour, is almost perfectly preserved. Certainly it's probably in better condition than many of South Africa's power stations.

But the fact that 95% of the wood is in perfect condition belies that human lives were lost to a costly, poorly engineered project that was pushed through at all costs.

It had an unprecedented number of cannons and ammunition and almost no room for ballast. It took little more than a breeze to capsize it.

Technical problems at Medupi and Kusile, meanwhile, reportedly include flaws in boiler design, which result in too-high temperatures for the spray water-cooling system to handle. This results in the units tripping. The coal mills do not meet operational technical requirements, too, so they need twice as many services.

At the heart, Medupi and Kusile's failures boil down to inadequate planning and poor design that in turn led to ballooning costs and delays. There is no additional capacity for stress. Vasa syndrome reminds us that mega project or not, the basics still apply.

King Gustavus Adolphus was a power-loving chap. It wasn't a coincidence that he wanted a warship. It wasn't the well-being of his people that he had in mind when he poured the nation's budget into double gundecks and over 500 giant sculptures that took over two years to complete.

Historical records show us that a few brave individuals did try to stand up to the king and suggest alternatives. Well, we know now how that went.

The role of state capture has been probed in the decline of Eskom and other SOEs – including the dysfunction at Medupi and Kusile. We know there were individuals who attempted to counsel against rash, power-driven decisions. We know how that went, too.

When the Vasa sank, the king was furious and demanded an explanation. "Sadly," writes J. Hope Suis in Mogul, "most of the fault pointed back to him".

Hands up if despite all that high-level probing and inquiring, you're still waiting for someone, anyone, to take responsibility for any of the cumulative train wrecks at our SOEs.

The Vasa was designed to carry 36 guns. It went to sea carrying twice that number, plus the abovementioned decorations, flags, and a number of other adornments it had not been equipped to support.

Even as Eskom's debt is approaching R500bn, the cost of pursuing Medupi and Kusile keeps accumulating alongside.

According to former CEO Phakamani Hadebe, this is because the power utility now no longer has a choice but to forge ahead. "Medupi is almost 94% [complete] and Kusile is sitting at about 89%; there is no going back, we just have to correct what we have," he recently said, adding, however, that "our challenge is that at best, they perform at about 50% or so".

Scholar R. Fairley notes the above as a key characteristic of Vasa syndrome. "The Vasa was launched after failing a stability test," he notes. Medupi and Kusile have consistently been performing at 50% or below, and there is mounting pressure on Eskom and government to find alternatives to its coal plants. Greenpeace recently suggested selling all but Medupi and Kusile and supplementing with sustainable alternatives, arguing it would relieve pressure on the grid.

Part of the problem with the Vasa was that "[i]t seems that no one was aware of the degree to which the Vasa had evolved during the 2 ½ years of construction," Fairley adds.

Similarly, Medupi and Kusile – as well as the country's energy needs – have evolved enormously in the decade-plus of development, contributing to expanding scope and cost on a shifting energy landscape.

So how does one avoid Vasa syndrome, one may ask? Worryingly, consensus appears to be that organisations and project leaders must - from the start - match projects to capabilities. Unfortunately for Eskom in this instance, the ship, as the saying goes, appears to have sailed.

* Marelise van der Merwe is sub-editor at Fin24. She was a guest of Microsoft and Sandvik in Sweden.

Related Links
OPEN LETTER: How to fix the boiler and mill problems at Medupi and Kusile
New Kusile unit powers up, 8 months ahead of schedule
Eskom's mega projects showed us mega red flags - here's what we can learn from them
Share
Next on Fin24
Khaya Sithole | We need to adapt to our new reality