'Too expensive, too much admin' – What if a forex bank account didn't have these problems? A recent survey hosted on News24 found that while 83% of adult respondents did not have a forex bank account, 89% would open a new account if it was quick, easy and cost-effective.

In the survey hosted on News24 in the month of February, 621 adults were surveyed. Only 17% of respondents indicated they had an active forex bank account.

Some of the major reasons that the other 83% found it difficult to open one included:

Of the 106 respondents who owned one, 54% said it was mostly used for trading. Interestingly, the other 46% found a variety of other ways in which they mostly used it:

With so many respondents indicating they would like to open a forex bank account, but an equivalent amount saying they do not have one, what problems need to be solved for the average South African to consider foreign currency part of their everyday financial life? Saving on fees, ease of use and knowledge

In the survey, only 10% of respondents said they knew enough about foreign currency to include it in their investment plan, with 31% indicating they knew "a little bit". The overwhelming majority either knew nothing (32%) or wanted to know more (28%). 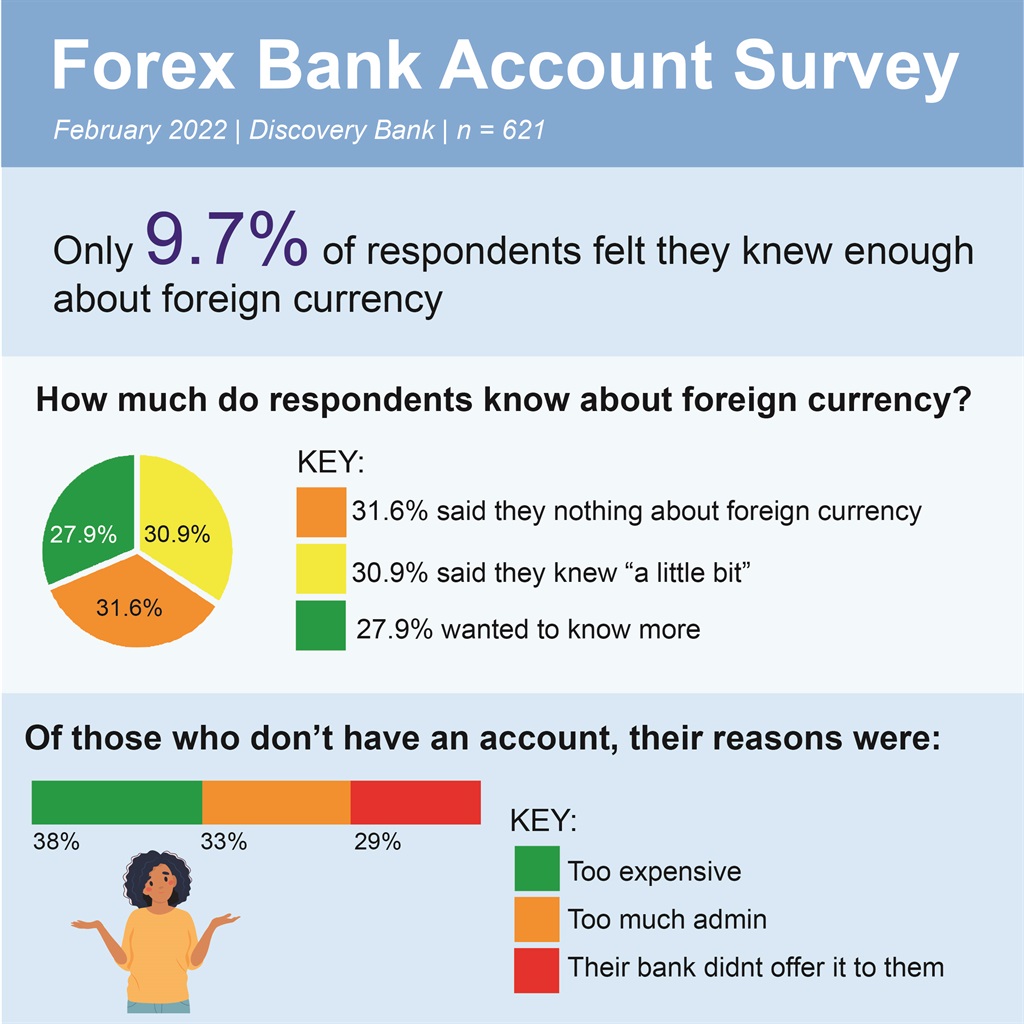 Those who owned a forex account said they would consider switching or opening a new account if it had a friendlier user experience (32%), ability to trade in an app (18%), cheaper fees (16%), better rates (21)% and real-time forex exchange (12%).

It can also revolutionise your spending when travelling abroad. Currently, when travelling overseas, only 18.5% said they use a forex account to make purchases, with the rest forfeiting fees and costs by using a debit card linked to a bank account (38%), a credit card (31%), or currency exchange in cash (13%). Discovery Bank’s Forex Account allows you to experience the only Real-Time Forex Accounts, available 24/7 on your banking app, where you can open, convert, save and pay in seconds.

You can start saving in Euros, Pounds and US dollars immediately, and can make overseas payments in over 60 countries. Discovery clients will not pay foreign currency conversion transfer fees for transactions between their different forex and Rand accounts.

You will also receive a free virtual card to add to your smartphone for seamless payments when travelling outside South Africa, as well as the option of a physical debit card.

You need to be an existing accountholder of a Discovery Bank Transaction Account, Card Account or Suite and 18 years or older to add any of our forex accounts to your banking portfolio.

This post was sponsored by Discovery and produced by BrandStudio24.

We live in a world where facts and fiction get blurred
In times of uncertainty you need journalism you can trust. For 14 free days, you can have access to a world of in-depth analyses, investigative journalism, top opinions and a range of features. Journalism strengthens democracy. Invest in the future today. Thereafter you will be billed R75 per month. You can cancel anytime and if you cancel within 14 days you won't be billed.
Subscribe to News24
Next on Fin24
How to keep track of small business financial transactions