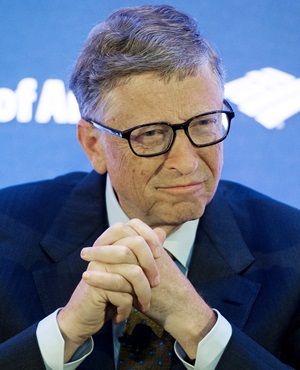 San Francisco - Microsoft co-founder Bill Gates said he’s enthusiastic about the company’s $26.2bn acquisition of LinkedIn, viewing it as an opportunity to build a business network for the working world like Facebook has created for social communities.

Users should be compelled to say: “This professional feed in LinkedIn, that is how I want to learn about my career, my company, my industry, and I’m going back there,” Gates said in an interview with Bloomberg TV’s Erik Schatzker.

“If we can make that as valuable as the Facebook feed in the social world, that’s huge value creation and that’ll happen over a period of years.”

The purchase is a way for Microsoft, which largely missed out on the consumer web boom dominated by the likes of Google and Facebook, to acquire social tools. Yet the price of the transaction, announced June 13 as one of the largest technology industry deals on record, weighed on Microsoft’s shares earlier this week.

Gates, who remains a board member of Microsoft, seemed unconcerned by the 2% decline in the stock since the deal was announced.“I certainly think that the value of the two companies combined is greater than the two by themselves, but I love the idea that the market wants us to show that,” he said.
We live in a world where facts and fiction get blurred
In times of uncertainty you need journalism you can trust. For only R75 per month, you have access to a world of in-depth analyses, investigative journalism, top opinions and a range of features. Journalism strengthens democracy. Invest in the future today.
Subscribe to News24
Related Links
LinkedIn mega-deal puts Twitter's future into focus
Microsoft top credit rating in danger over $26bn LinkedIn deal
Next on Fin24
Elon Musk to visit China soon for Tesla factory ground breaking

See all newsletters
Voting Booth
Facebook is facing a fresh crisis after a former employee turned whistle-blower leaked internal company research . Do you still use Facebook?
Please select an option Oops! Something went wrong, please try again later.
Yes, the benefits outweigh the risk for me
25% - 269 votes
No, I have deleted it
45% - 480 votes
Yes, but I am considering deleting it
30% - 319 votes
Previous Results
Covid-19 Money Hub
Covid-19 Money Hub - answering your business and money questions during the crisis