Johannesburg - More than 1 500 data breached led to almost one billion records being compromised in 2014 according to digital security firm Gemalto.

Subsequently, data breaches grew 49% in 2014 as identity theft has fast become a top breach category in the world.

This is according to Gemalto’s ‘Breach Level Index’ (BLI) which further says there has been a 78% increase in data records that were either stolen or lost compared to 2013.

The BLI is a global database of data breaches as they happen and provides a methodology for security professionals to score the severity of breaches and see where they rank among publicly disclosed breaches.

“The main motivation for cyber criminals in 2014 was identity theft with 54% of the all data breaches being identity theft-based, more than any breach category including access to financial data,” said Gemalto in a statement.

“In addition, identity theft breaches also accounted for one-third of the most severe data breaches categorized by the BLI as either Catastrophic (with a BLI score of between 9.0 and 10) or Severe (7.0 to 8.9). Secure breaches, which involved breaches of perimeter security where compromised data was encrypted in full or in part, increased to 4% from 1%,” said the company.

Tsion Gonen, who is the Vice-President of Strategy for Identity and Data Protection at Gemalto, said there is a shift taking place in the tactics of cyber criminals with “long-term identity theft becoming more of a goal than the immediacy of stealing a credit card number”.

“Identity theft could lead to the opening of new fraudulent credit accounts, creating false identities for criminal enterprises, or a host of other serious crimes. As data breaches become more personal, we’re starting to see that the universe of risk exposure for the average person is expanding,” said Gonen.

View the below infographic that outlines what types of data breaches happened where in 2014: 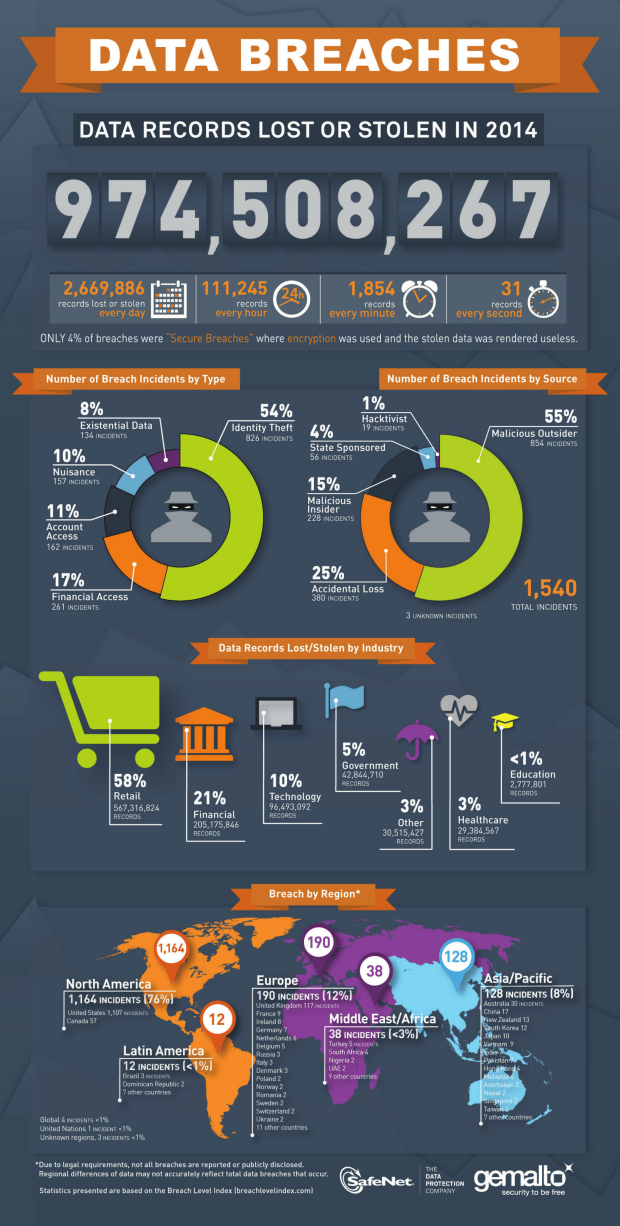 We live in a world where facts and fiction get blurred
In times of uncertainty you need journalism you can trust. For only R75 per month, you have access to a world of in-depth analyses, investigative journalism, top opinions and a range of features. Journalism strengthens democracy. Invest in the future today.
Subscribe to News24
Related Links
'Growler' WD home server is a data saver - review
France faces hacker blitz after attacks
Next on Fin24
WATCH: A 3D device that will allow you to reach inside your computer