I know I spend too much on medical insurance, but I'm terrified to rely on the state for my medical care, says Susan Erasmus.

High medical bills are right up there on most people's worry list. Everyone has horror stories to tell about excessive private healthcare costs: a friend who broke her wrist 18 months ago (she fell over a dead zebra – really) managed to accrue a hospital bill of R65 000 in 48 hours at a private hospital.

Medical schemes don't come cheap (just ask our Minister of Health) and there are many people who simply can't afford them. My broken-wristed friend gave the state hospital's trauma unit one look and decided to go private – on borrowed money. She now has a medical scheme.

Private health care is definitely out of reach of 90% of wage earners who aren't medical scheme members. The proposed National Health Insurance is supposed to solve this problem, by providing access to decent healthcare for all SA citizens, regardless of their ability to contribute. I don't begrudge this to anyone. Contributions will be according to your income level, and everyone will have to pay, whether you plan to use these services or not. And there's the rub.

I really would like to spend less on medical insurance, but I am not sure I can trust the state healthcare system to provide the kind of service with which I would feel safe and comfortable. Some state hospitals are no doubt fabulous, but horror stories abound about the lack of care and hygiene in others.

When my life is in the balance, I want to know that I am in good hands. Clearly all our politicians feel  this way too, as they all go to private and not state hospitals when they are ill. This does not inspire a huge amount of confidence.

Then there's the massive cost the NHI would add to the already strained budget. There have been some creative mathematics to show that there is an unfair spend on the private health sector and that this should be equalised. What does need to be taken into account is that apart from a few  tax breaks, this is not money coming from the state coffers.

The following graph refutes government claims that medical schemes claims have doubled over the last decade: 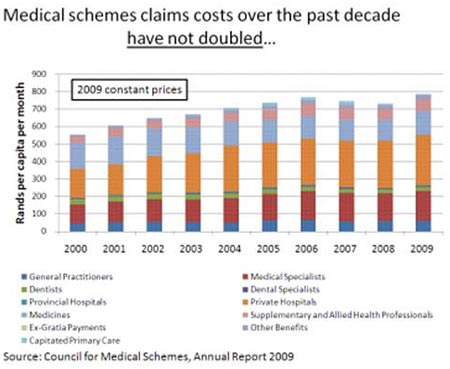 This is but one example of questionable stats being bandied about, and this worries me deeply. According to world standards, our health spend is already extremely high, and yet medical outcomes are poor. What is happening to the money? Or are our medical staff simply not up to scratch?

Some economists say that the NHI could bring about a recession in SA. This country doesn't need any  added economic pressure.

Right, here's the bottom line: if our current government and health administrators demonstrate that they are able to fix the major problems in the current state health system, I will support the NHI.

But unless some major overhauls are evident, they will only be putting a new jockey on a dead horse (or should that be a dead zebra?). And a very expensive jockey at that.