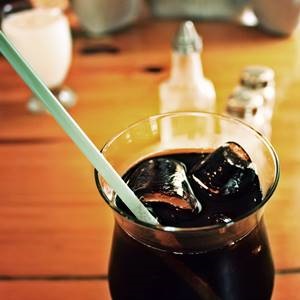 When it comes to guilty pleasures, soda is right up there with gossiping and crushing entire tubs of ice cream at a time; you know it’s not great for you, but it just feels so. darn. good.

Really, though, if there’s anything worth cutting from your diet — it’s soft drinks. Easier said than done, I get it! But a few simple techniques might help you (finally) figure out how to stop drinking soda for good.

You already know that soft drinks are, well, not great for you. Okay, it’s pretty bad for you. At least if you want to live a long, kick-ass life.

A recent study published in JAMA Internal Medicine on more than 450,000 people from across Europe found that people who consumed two servings of soft drinks per day (diet, included) had a higher risk of dying from any cause compared to those who sipped less than one serving a month. (It’s also been linked with higher risk of stroke, diabetes, and obesity.)

“The challenge with soft drinks is the quantity of added sugars,” says Brooklyn-based dietitian Maya Feller, author of The Southern Comfort Food Diabetes Cookbook. Often, a serving meets (or exceeds!) the recommendation for your total daily added sugar intake.

Yep: 330ml can of cola packs 35 grams of sugar. That’s nearly nine teaspoons of sugar dumped in there. Not to mention that a can of lemon-lime soft drink has 38 grams (nearly 10 teaspoons) of sugar. Whoa. You knew it was sweet, but didn’t know it was that sweet.

Before you even go there, let me tell you: Diet soft drinks aren’t the answer, either. Diet soft drinks may be sugar-free, but all those artificial, calorie-free sweeteners aren’t exactly good for you, either.

“Some artificial sweeteners are hundreds of times sweeter than table sugar,” says Feller. While they may have less of an effect on your blood sugar, that sweetness overload still makes you crave more sugar, she says. Not exactly the outcome you’re going for.

Not to mention, research has linked consuming artificial sweeteners with an increased risk of stroke, depression, and belly fat. Again, no bueno.

So what is the best way to stop drinking soft drinks?

Ready to give the syrupy-sweet habit the boot? Just follow these dietitian-backed tips.

What’s a good drink instead of soft drinks?

Does the thought of swapping soft drinks for plain water literally make you cringe? Yeah, I don’t blame you. Keep your taste buds occupied by subbing soda out for one of these flavourful, good-for-you drinks.

Sparkling water. If the fizz and flavour are what you love about soft drinks, meet your new love: flavoured sparkling water, says Davis.

Kombucha. Davis also gives kombucha, a fermented, fizzy tea, the green light. Since this buzzy drink does naturally contain some sugar (it’s necessary for the fermentation process), read labels carefully and look for a brand that’s lower in sugar.

We live in a world where facts and fiction get blurred
In times of uncertainty you need journalism you can trust. For 14 free days, you can have access to a world of in-depth analyses, investigative journalism, top opinions and a range of features. Journalism strengthens democracy. Invest in the future today. Thereafter you will be billed R75 per month. You can cancel anytime and if you cancel within 14 days you won't be billed.
Subscribe to News24
Related Links
Here's another warning on soft drinks – and it doesn't matter if they contain sugar or not,...
Don't be fooled by foods that sound healthy but aren't
Hidden dangers in food marketed to children
Next on Health24
Coffee drinking linked to lower death risk – even with sugar