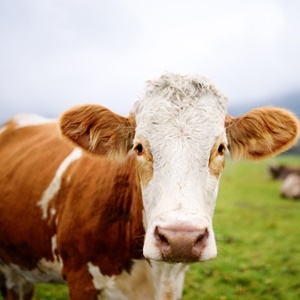 New Zealand scientists are breeding a herd of cows that produce lower-fat milk after the chance discovery of a natural gene mutation in one animal.

Milk from the cows is also high in health-boosting omega-3 fatty acids and makes butter that spreads as easily as margarine even when chilled, biotechnology company Vialactia said Monday.

Vialactia, a subsidiary of the Fonterra Co-operative Group, one of the world's largest milk companies, bought the cow for 300 New Zealand dollars (about R 1 500) and moved it to a research site.

Significantly less fat
While she looked like any other Friesian cow, testing revealed that Marge's milk contained about 1 percent fat.

Louis Loubscher from South African milk producer Fair Cape explains that different cow breeds produce milk with varying degrees of milk fat. For example, the Jersey cows that are typically bred in the Southern Cape produce milk with more fat than the Friesian cows from the Western Cape.

The milk that is produced by the Friesian cows of the Western Cape typically has a fat content of about 3,5%.

"The composition of the milk is also directly related to the cows' feed," he says. "This can be easily manipulated."

According to Loubscher, minerals and protein do, however, remain intact when cream is removed from full-cream milk to produce low-fat or fat-free milk.

Exact mechanism unknown
According to Snell, scientists have yet to isolate the exact chemical pathway responsible for the naturally produced low-fat milk.

"Every now and then nature throws up these sorts of things and it was simply a case of us being in the right place at the right time," he said.

The company expects the first commercial herd of cows supplying natural low-fat milk and spreadable butter for the market by 2011. – (Sapa-AP)

We live in a world where facts and fiction get blurred
In times of uncertainty you need journalism you can trust. For only R75 per month, you have access to a world of in-depth analyses, investigative journalism, top opinions and a range of features. Journalism strengthens democracy. Invest in the future today.
Subscribe to News24
Next on Health24
Espresso, Americano, or decaf? Desire for a particular coffee driven by genetic code