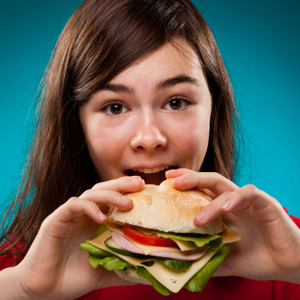 iStock
People who increased the number of times they chewed their food before swallowing ate less over the course of a meal, in a new study.

Slow eaters tend to be slimmer. But researchers didn't know whether asking people to chew more would change the amount of food they ate.They found meal sizes shrunk when adults chewed extra before swallowing - whether they were normal weight, overweight or obese.

"The study reinforces the benefits of taking time to chew food well and enjoy the variety of textures and flavours in our meals," registered dietician Constance Brown-Riggs told Reuters Health in an email.Brown-Riggs is a spokesperson for the Academy of Nutrition and Dietetics and was not involved in the new research.

Prospective study participants were asked to consume five portions of Totino's pizza rolls and count the number of times they chewed each roll. Researchers did not tell them what specifically was being tested in the study.Forty-seven people went on to finish the study. Sixteen were a normal weight, 16 were overweight and 15 were obese.

Those participants attended three weekly lunchtime test sessions. On each day, researchers gave them 60 pizza rolls and told them to eat until they were full. Depending on the session, researchers asked people to chew every bite the same number of times as at their test visit, 50% more or twice as many times.

They also asked participants how full they were feeling before, during and after each lunch session.Researchers found people ate about 10% less food, corresponding to 70 fewer calories, when they increased their chewing by 50%.

When they doubled their chewing, they ate 15% less food and 112 fewer calories.Normal-weight participants ate more slowly than overweight and obese participants. Across the board, people spent more time eating when they increased their chewing.

The participants rated their appetite the same after each meal even though slower chewing reduced how much they ate, according to findings published in the Journal of the Academy of Nutrition and Dietetics.

Researchers noted that the study was conducted under laboratory conditions, so it's not clear how it would translate to normal life. Long-term studies are needed to look at the effect of extra chewing on weight and other markers of disease."Increasing the number of chewing cycles before swallowing can reduce food intake and increase satiety," James Hollis said.

He worked on the study at Iowa State University in Ames."However, it is not clear if this is a practical approach to weight management," Hollis said. The researchers are now looking to see whether how fast people eat, for instance, influences how much they consume."It takes about 20 minutes for the brain to signal your stomach that you're full," Brown-Riggs said.

"Fast eaters can consume a large amount of food within that 20-minute period resulting in more calories, which can lead to overweight or obesity. This may be why participants in this study reduced their food intake. Increasing the number of chews increased the meal duration," she said.
We live in a world where facts and fiction get blurred
In times of uncertainty you need journalism you can trust. For only R75 per month, you have access to a world of in-depth analyses, investigative journalism, top opinions and a range of features. Journalism strengthens democracy. Invest in the future today.
Subscribe to News24
Related Links
Obesity gene found
Obese teens face grim future
Obese older women face disability risk
Next on Health24
Five nutrition mistakes you make when you start exercising