Recent studies have revealed potato chips and french fries to be the worst contributors to weight gain – and with good reason. Have you ever wondered why you can't eat just one chip or a single fry? It's not just the carbohydrates at fault. 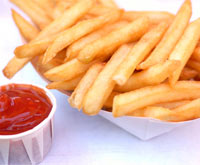 In their study, the Piomelli team discovered that when rats tasted something fatty, cells in their upper gut started producing endocannabinoids. Sugars and proteins, the researchers noted, did not have this effect.

The process starts on the tongue, where fats in food generate a signal that travels first to the brain and then through a nerve bundle called the vagus to the intestines. There, the signal stimulates the production of endocannabinoids, which initiates a surge in cell signaling that prompts the wanton intake of fatty foods, Piomelli said, probably by initiating the release of digestive chemicals linked to hunger and satiety that compel us to eat more.

Too much fat leads to diabetes, cancer

"This is the first demonstration that endocannabinoid signaling in the gut plays an important role in regulating fat intake," added the Louise Turner Arnold Chair in the Neurosciences and professor of pharmacology.

Study results appear in the online edition of Proceedings of the National Academy of Sciences.

Piomelli said that from an evolutionary standpoint, there's a compelling need for animals to consume fats, which are scarce in nature but crucial for proper cell functioning. In contemporary human society, however, fats are readily available, and the innate drive to eat fatty foods leads to obesity, diabetes and cancer.

The findings suggest it might be possible to curb this tendency by obstructing endocannabinoid activity – for example, by using drugs that "clog" cannabinoid receptors. Since these drugs wouldn't need to enter the brain, they shouldn't cause the central side effects – anxiety and depression – seen when endocannabinoid signaling is blocked in the brain, Piomelli noted.

Director of the UCI School of Medicine's Center for Drug Discovery & Development, Piomelli is one of the world's leading researchers on endocannabinoids. His groundbreaking work is showing that this system can be targeted by new treatments for anxiety, depression and obesity . - (EurekAlert, July 2011)

Quiz: Am I eating too much fat?
Top 10 foods with hidden fat

We live in a world where facts and fiction get blurred
In times of uncertainty you need journalism you can trust. For 14 free days, you can have access to a world of in-depth analyses, investigative journalism, top opinions and a range of features. Journalism strengthens democracy. Invest in the future today. Thereafter you will be billed R75 per month. You can cancel anytime and if you cancel within 14 days you won't be billed.
Subscribe to News24
Next on Health24
Vitamin supplements: Experts say unless you have a real deficiency, you’re likely wasting your money