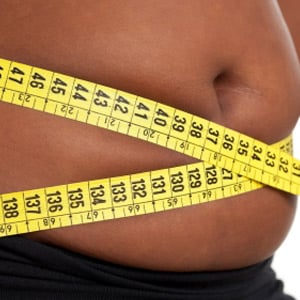 For the extremely obese, the benefits of weight-loss surgery generally outweigh the risks of the procedure. Now, new research suggests that the same might be true for less-obese people as well.

"We're seeing a pattern in these studies. There's a definite impact on the diabetes after surgery. Some people don't respond so well, but most do," said Dr Bruce Wolfe, a professor of surgery and co-director of bariatric surgery at Oregon Health & Science University, in Portland.

But, he added, "We need longer-term studies to identify who's the right candidate for surgery, and we need a number of years of follow-up and a fairly large study population to see if the diabetes improvements after surgery prevent the heart disease, blindness and kidney disease associated with type 2 diabetes."

Results of the two new studies, as well as an accompanying editorial written by Wolfe and colleagues, are in the Journal of the American Medical Association.

Body mass index (BMI) is a measurement calculated with height and weight that's used to estimate the amount of body fat someone has. A BMI of 18 to 24.9 is considered normal weight while 25 to 29.9 is overweight, according to the US Centers for Disease Control and Prevention. Mild to moderate obesity is between 30 and 39.9, and 40 and above is morbidly (or extremely) obese.

The first study was a review of previous research on non-morbidly obese people with type 2 diabetes. The authors searched the medical literature and among other related studies, found three randomized controlled clinical trials that compared weight-loss surgery (also known as bariatric surgery) to nonsurgical treatments, such as diabetes medications and lifestyle changes.

"I think we found some promising results for the lower BMI patients with diabetes. There were better results in terms of controlling glucose [blood sugar] and weight loss over one to two years. That we have a way to provide some sort of successful treatment is exciting. But, we don't yet know how sustainable these changes are. We need longer and larger studies," said Dr Melinda Maggard-Gibbons, lead review author, and an associate professor with RAND Health in Santa Monica, Calif.

The second study included 120 people from four teaching hospitals in the United States and Taiwan. They all took part in an intensive lifestyle and medical management program before the study, and half of the group was given gastric bypass surgery.

A year later, 28 people from the surgery group and 11 people from the medical management group met the study's goals. These goals were to have an HbA1C level of below 7% (a measure that indicates good blood sugar control); LDL or "bad" cholesterol of less than 100 milligrams per deciliter; and systolic blood pressure (the top number) of less than 130.

"The risk of these surgeries is fundamentally low, but we can't make it zero. Most of the complications can be managed. But, disasters can occur, and if you're that one, any benefit of surgery is lost," Wolfe said.

Cost is another issue. A weight-loss surgery may cost $20,000 (R196 398.00) and up, according to the US National Institute of Diabetes and Digestive and Kidney Diseases. And, insurance may or may not pay for the procedure, as there isn't yet clear evidence of a long-term benefit for people who are less obese.

"There are a whole host of contributing factors to consider. At some point, the surgery will be identified to work best in some and not so well in others. We understand this in cancer treatment, and we want to be able to do the same thing with weight loss surgery, and this is a part of the process to get there," Wolfe said.

So, what should folks with lower-level obesity and type 2 diabetes do? Wolfe said to start with making a concerted effort to lose weight and exercise regularly, and to make sure you use any diabetes medications prescribed for you exactly as your physician directs you to.

"If this doesn't work, consider surgery. If you have risk factors, like diabetes, you can appeal a negative insurance decision and ask for an exception," he suggested.

Maggard-Gibbons also suggested talking to your doctor or a bariatric surgeon about the possibility of enrolling in a clinical trial.

Learn more about weight-loss surgery from the U.S. National Institute of Diabetes and Digestive and Kidney Diseases.

We live in a world where facts and fiction get blurred
In times of uncertainty you need journalism you can trust. For 14 free days, you can have access to a world of in-depth analyses, investigative journalism, top opinions and a range of features. Journalism strengthens democracy. Invest in the future today. Thereafter you will be billed R75 per month. You can cancel anytime and if you cancel within 14 days you won't be billed.
Subscribe to News24
Related Links
Life improves after weight-loss surgery
Obesity surgery a lifeline for some
New obesity drug could launch in 2014
Next on Health24
The danger of vitamin D 'overdose': Experts warn public after man lands in hospital