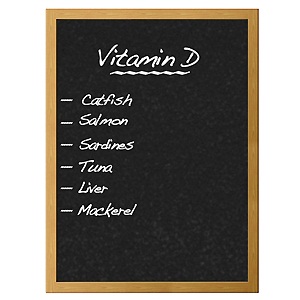 Sources of Vitamin D from Shutterstock
We're stunned by all the amazing, newly discovered health benefits that vitamin D delivers. Take a look at this roundup of the latest research - there's something in it for you.

Research showed that people with a vitamin D deficiency faced an increased risk for heart attack and stroke, according to a December 2008 review of studies by researchers at the Mid-America Heart Institute in Kansas City.

A Harvard Medical School study, which began in 1996 and looked at over 1 700 people with an average age of 59, featured prominently in the review. This study showed that people with low levels of vitamin D in their blood had twice the risk of a heart attack, heart failure or a stroke compared to those with higher levels of the sunshine vitamin.

The highest incidence of heart disease was seen in people with both high blood pressure and low vitamin D levels.

Another study showed that men with low levels of vitamin D were about 2½ times more likely to have a heart attack than those with higher levels of the vitamin.

Read: How to have a happy, healthy heart

If you're concerned about your risk for cancer, take note: low levels of vitamin D may contribute to cancer, according to a number of recent studies.

Take the test: Am I at risk for developing cancer?

University of California researchers explain that the first event in cancer is a loss of communication among cells due to, among other things, low vitamin D levels.

This loss may play a key role in cancer by disrupting the communication between cells that's essential to healthy cell turnover, allowing more aggressive cancer cells to take over.

Other studies have shown that the incidence of colon, breast and prostate cancer are higher in areas of the world where exposure to sunlight is low and vitamin D production by the body is hampered.

Frequently plagued by colds and the flu?

The largest study of its kind, involving 19 000 American men and women, have recently shown that lower levels of vitamin D are linked to an increased risk for respiratory infections such as colds and the flu.

People with less than 10 nanograms of vitamin D per millilitre of blood were nearly 40% more likely to have a respiratory infection than those with vitamin D levels of 30 nanograms or higher.

Read: Vitamin D helps to ward off flu and assists in controlling asthma

Bacterial vaginosis is a problem for many women, and a real risk during pregnancy.

Now research by the University of Pittsburgh has shown that pregnant women who are deficient in vitamin D may be at increased risk for developing bacterial vaginosis. This vaginal infection may increase the chances of preterm delivery.

Monitoring your vitamin D intake could have benefits in the workplace. Research shows that low vitamin D levels could be tied to thinking, or cognitive impairment, in older men.

An investigation of European men by University of Manchester researchers found that men with low levels of vitamin D scored worse on a standard test of cognitive ability than did their peers with normal levels. The association was strongest in men with vitamin D levels below 35 nanomoles per litre.

Read: How you can improve your cognitive abilities

Low levels of vitamin D have also recently been associated with loss of cartilage in the knee joints of older people. Cartilage loss is the hallmark of osteoarthritis.

The humble sunshine vitamin could also play a role in preventing multiple sclerosis, a chronic disease of the nervous system.

Several studies have shown that children with multiple sclerosis (MS) had low levels of vitamin D when they first began to show evidence of the condition. In one Toronto Hospital study, 17 of 19 children who had been diagnosed with MS had vitamin D levels below the target level.

To supplement, or not

At this stage, however, researchers are still cautious to recommend widespread supplementation of the vitamin. The recommended daily intake is 200 international units (IUs) for adults under 50, 400 IUs for adults between 51 and 70, and 600 IUs for those 71 and older.

They do reckon, however, that many of us can probably do with a bit more vitamin D in our diets. The vitamin can be found in such foods as canned tuna, cereal and fortified milk and juice.

The body can also be triggered to naturally produce vitamin D after adequate exposure to sunlight.

It's also been suggested that approximately 5 - 30 minutes of sun exposure between 10am and 3pm at least twice a week to the face, arms, legs or back, without sunscreen, leads to sufficient vitamin D synthesis.

Is vitamin D the answer to auto-immune diseases?
Are all vitamin D supplements the same?
If you don't get enough sunlight, your could be increasing your risk of a stroke