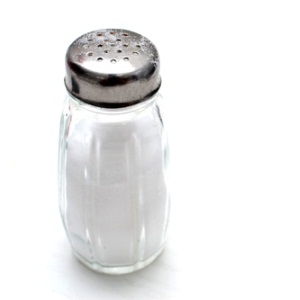 Salt pot from Shutterstock
Results from the largest study of its kind ever conducted – involving 18 countries and more than100,000 people – indicate that the current recommended maximum sodium intake for the population by 2020 is actually too low and may even be unsafe. However, high sodium is also harmful, so an “optimal” range is the best target.

Two reports from a global collaborative study involving investigators from the North-West University’s Potchefstroom Campus, as well as investigators from 17other countries, are shaking up conventional wisdom around salt consumption. This study was published last week in the New England Journal of Medicine.

The Prospective Urban Rural (PURE) study, led by investigators from the Population Health Research Institute, McMaster University and Hamilton Health Sciences, followed more than 100,000 people for nearly four years. The study assessed sodium and potassium intake and related them to blood pressure as well as to deaths, heart disease and strokes.

Researchers have shown that the effects of increasing sodium intake on raising blood pressure – a risk factor for heart attack, heart failure, stroke and other problems – become dramatically worse as intake rises above 5 grams per day, especially among people who already have high blood pressure, or who are older than 55, or both.

“While there has been much focus on reducing salt in the diet, an important and ignored approach to lowering blood pressure is increasing the amount of potassium consumed. A balanced approach is what is likely to have the greatest benefit in lowering blood pressure,” says Mente, the leading author on the first report. “This can be achieved by moderation in salt intake, combined with eating lots of fruits and vegetables.”

Read: Your complete guide to potassium

While too much salt has long been recognized as a serious health risk, the researchers have also found that may there be a risk from eating too little.

In fact, the lead author of the second report, Martin O’Donnell, suggests that what is now generally recommended as a healthy daily ceiling for salt consumption appears to be set too low.

“Low sodium intake does reduce blood pressure modestly, compared to moderate (or average) intake, but low sodium intake also has other effects, including adverse elevations of certain hormones that are associated with an increase in risk of death and cardiovascular diseases. The key question is whether these competing physiologic effects result in net clinical benefit or not,” O’Donnell says.

“In the PURE study, we found the lowest risk of death and cardiovascular events in those who consumed moderate amounts of sodium intake (3 to 6 grams per day), with an increased risk above and below that range. While this finding has been reported in previous smaller studies, PURE is the largest international study to study sodium intake and health outcomes, and adds considerable strength to the contention that moderate sodium intake is optimal.”

The studies were funded from more than 50 sources, including the PHRI, the Heart and Stroke Foundation of Ontario and Canada and the Canadian Institutes of Health Research.

“The findings of both studies are robust, globally applicable and collectively question established dogma and recommended policies. This also means that salt reduction should be primarily targeted at those who have high BP and those who consume a lot of salt.” says Salim Yusuf, the Principal Investigator of the global PURE study, senior author of both reports, and Director of the Population Health Research Institute, which designed and coordinated the study.

Taken together, the papers show there is a “sweet spot” for sodium consumption, where too much or too little can be damaging, while a moderate amount between 3 and 6 grams is optimal. The good news is that most people in the world consume an amount in the optimal range, the researchers found.

In an accompanying editorial in the NEJM, Prof Suzanne Oparil from the University of Birmingham, Alabama, urged reconsideration of current guidelines and recommended randomised trials comparing outcomes in people who consume usual salt intake to very low intake to assess if further reductions in sodium reduces clinical events. “In the absence of such studies, targeting moderate levels of sodium intake makes sense and is supported by the existing evidence” writes Prof Oparil.

See breaking news and the hottest health tips before anybody else by joining South Africa’s biggest and best health community, like health24 on Facebook now!
We live in a world where facts and fiction get blurred
In times of uncertainty you need journalism you can trust. For only R75 per month, you have access to a world of in-depth analyses, investigative journalism, top opinions and a range of features. Journalism strengthens democracy. Invest in the future today.
Subscribe to News24
Next on Health24
What you might be getting wrong about probiotics – and how fibre fits into the picture