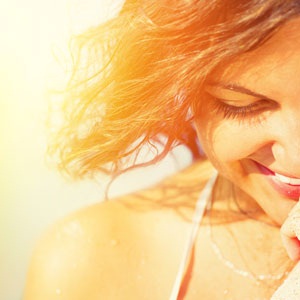 Shutterstock
Ever since the news broke that vitamin D may prevent colon cancer, the so-called "sunshine vitamin" has generated a lot of publicity. It also basically changed its image from being the one vitamin we are able to make out of cholesterol when our skins are exposed to sunlight, to being regarded as an actual steroid hormone, which is vital for good health (Mahan et al, 2012).

This change in perspective has caused much confusion among the general public because the natural reaction of the man on the street is to start taking vitamin D supplements in an attempt to prevent colon and other types of cancer.

But the danger of excessive intakes of vitamin D is also important.

Since then, a variety of scientific articles have been published on the subject. These may shed some light on how much vitamin D the average South African requires and how this vitamin can be obtained.

Read: The wow about vitamin D

The two main sources of vitamin D are oral ingestion of foods (particularly those that are fortified with vitamin D, such as most brands of margarine and some brands of packaged milk) or vitamin supplements, and exposure of the skin to sunlight, which causes the body to manufacture its own vitamin D.

Research has shown that western diets are often deficient in vitamin D, with elderly people ingesting considerably less vitamin D than required. However, the use of vitamin D supplements is associated with potential overdosing and interactions that can occur between vitamin D and other nutrients.

It is, however, relatively easy for most South Africa to expose their skins to sunlight for short periods every day to make their own vitamin D.
It is estimated that an exposure lasting 20 minutes a day should be sufficient for most individuals to produce adequate vitamin D supplies in their bodies.

Slightly longer exposure times are required for people with black or brown skins because darker skins are not as efficient in producing vitamin D as white skins.

Persons with white skins should also not overdo sun exposure as this is linked to skin damage, eye damage, and the potential development of skin cancer or melanoma.

Link between vitamin D and cancer

According to German researchers (Reichrath  et al, 2006) a large number of studies have confirmed that vitamin D deficiency is linked to the development of colon, prostate and breast cancers.

Interestingly, there is an association with distance from the equator (high sun exposure) and an increased incidence of breast, colon, prostate and ovarian cancer. In other words, these cancers occur more commonly in those countries where exposure to the sun is less likely due to inclement weather (e.g. the Scandinavian countries and Northern Europe).

In addition, research studies have found that exposure to sunlight (which produces more vitamin D in the body) improved the outcome and increased the survival rate for some cancers.

Recently published results of a research study conducted in Europe showed that people with high levels of vitamin D had a lower risk of colon cancer. The researchers studied the link between vitamin D levels in the blood, dietary intake of vitamin D and risk of colon cancer in people participating in the European Prospective Investigation into Cancer (EPIC) Study which involves more than 520 000 subjects.  The participants with the highest blood levels of vitamin D had a 40% decrease in colon and rectal cancer risk than the people with the lowest vitamin D levels (Medscape, 2010).

Researchers believe that vitamin D is a potent hormone that can regulate cell growth, thus having a beneficial effect on cancerous tissue.
It is well known that a serious vitamin D deficiency causes rickets in children and bone deterioration (a condition called osteomalacia) in adults (Mahan et al, 2012).

Vitamin D may also help against autoimmune diseases, cardiovascular disease and to control cholesterol. The latter function is due to the fact that the body produces vitamin D from cholesterol, thus lowering cholesterol levels.
It is known that cholesterol levels increase in populations in winter in those countries that have little sunlight, and may explain geographical differences in the incidence of coronary heart disease.

An important question that now needs to be answered is: "How much vitamin D is required to protect us against cancer and other diseases?"

In the USA, nutrition authorities recommend DRIs (Dietary Reference Intakes) of400 IU (International Units) or 10 microgram/day for infants and 600 IU or 15 microgram/day for children as well as adults (Mahan et al, 2012).

In view of the new research findings, some scientists now estimate that we may require up to 1000 IU or 25 microgram of vitamin D a day to prevent bone fractures, protect us against certain cancers and obtain other health benefits.

This recommendation is being questioned by other experts who fear that vitamin D overdose may ensue if the general population start taking massive doses of vitamin D. In addition, a large review of studies relating to the effect of vitamin D intake, including from vitamin D supplements, on health and various diseases, showed that low blood levels of vitamin D may well be an indication of “disease-related inflammation” rather than of inadequate intakes (Medscape, 2013).

And expose your skin to the sun for 20 minutes a day or slightly longer if you have a dark skin. Full body exposure to sunlight can produce as much as 10 000 IU or 250 microgram of vitamin D in your body and because vitamin D is a fat-soluble vitamin, it can be stored in the liver for future requirements.

Read: The sun and vitamin D

Don't overdo sun exposure as this can lead to skin problems and even cause melanoma (skin cancer) if you have a light skin.
Vitamin D supplements should only be taken under the supervision of your medical doctor. If you suspect that you may be prone to a vitamin D deficiency because you are not able to regularly spend some time in the sun, consult your doctor who will send you for the necessary blood tests to determine if you have a vitamin D deficiency or not. If you do, then the doctor will prescribe a vitamin D supplement for you.

South Africans are in the lucky position to be able to use the climate to provide most of their vitamin D requirements, which may well be protective against certain cancers and bone deterioration, and even lower cholesterol levels slightly.

(Photo of sunshine girl from Shutterstock)
Read more:
Vitamin D: your key to optimal health
The miracle of vitamin D

We live in a world where facts and fiction get blurred
In times of uncertainty you need journalism you can trust. For 14 free days, you can have access to a world of in-depth analyses, investigative journalism, top opinions and a range of features. Journalism strengthens democracy. Invest in the future today. Thereafter you will be billed R75 per month. You can cancel anytime and if you cancel within 14 days you won't be billed.
Subscribe to News24
Related Links
Vitamin D deficiency tied to severe pre-eclampsia
Vitamin D not a cure-all
Vitamin D may slow multiple sclerosis
Next on Health24
Do you take biotin supplements? They could affect your medical tests