Imagine carrying around the weight equivalent to a baby elephant every day of your life? Madeleine Ray from Polokwane gained just that, 113kg in seven years, and finally tipped the scale at 163kg. She was only 27 years old. 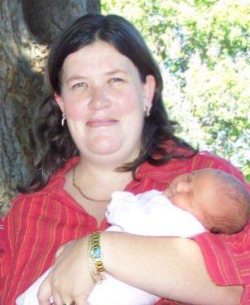 “You would never say that I weighed 52kg, 14 years ago. Unlike a lot of overweight women, I have not always been this way. I was active, mostly ate what I wanted to and never in a million years thought that I would one day struggle so much with my weight,” says Madeleine.

Deciding to take the plunge and change your entire lifestyle for the benefit of your health and happiness can be a very scary decision, one that Madeleine struggles with everyday.

“To date, I have lost a total of 76kg and plan to lose another 10kg. It has been a long hard journey but I am on an emotional high, I still have my “fat days” but this is the reason I carry my size 50 pants with me as a reminder.” says Madeleine.

“My girls never used to ask me to play with them, as they knew I was always tired, now I’m the one calling them to play outside. I needed to lose this weight to set an example for them, and show them that it is possible to achieve your goals even if they do seem unrealistic”.

It all started when she married at the age of 20 and fell pregnant with her triplet girls. They were born with colic, which weighed heavily on Madeleine’s stress levels. She quickly found herself rarely paying attention to what she ate or how often she exercised because her children came first and before she knew it, five years had passed and her fourth daughter was born.

Both Madeleine’s mother and husband are overweight and her sister has to work hard to keep her figure a size 12. Madeleine’s weight loss journey has not only been one big emotional high, it’s also put tremendous pressure on her marriage and family life.

"I never lost the weight I gained with any of my pregnancies and by the time I was 27 years old I weighed 163kg. Nobody commented, well at least not to my face anyway, and I did not realise how big I’d become. I saw my kids growing up and sadly never had energy to play with them. I did not want to go anywhere and be seen.

"I was so embarrassed. I could see the look on people’s faces when they saw me. I felt the stares and hated mirrors. I was officially a size 50 and getting bigger by the day. I became very depressed. One morning, struggling to get myself out of bed to start my usual morning routine I passed the children’s rooms and I watched them sleeping. In that moment, it just hit me! I said to myself: "Look at you, do you want to die?"

"This is what sparked my incredible weight loss journey! I first tried a quick weight loss eating programme and managed to lose 11kg in two weeks. I then signed up at multiple gyms never finding one that really suited all my needs.

"My goal was to lose 60kgs by the age of 30. On my 30th birthday I was 15kg short of my goal and felt very disappointed after thinking I had worked so hard. "It wasn’t soon after that I decided to join Adventure Boot Camp, an outdoor fitness programme for women. The atmosphere was addictive, and being surrounded by other women who understood my situation made me feel like I’d finally found the 'gym' for me! The motivation I received from fellow campers was amazing and it really pushed me to do my best.

"I have currently attended 9 camps with Adventure Boot Camp and have managed to stabilise my weight at 87kg.

"Losing all this weight has been tough and people pay me such wonderful compliments. They actually listen to what I have to say now and I feel like for once I matter. The sad thing is that no-body actually knows what your body goes through from putting on so much weight and losing it again. I have excess skin on my arms, breasts, tummy and legs and  have tried so many ways to re-elasticise my skin but because I lost weight so rapidly in the beginning due to the quick weight loss eating programmes I followed, my skin has taken a beating. I plan to lose another 10kgs before undergoing surgery that will remove the skin.

"To all those women out there that plan to use quick-fix diets, please know you will bear the brunt later in life. What you really need is hard work and dedication coupled with a healthy balanced eating plan and regular exercise to achieve your weight loss goals."

Boot camp: the truth
Boot Camp ain't for sissies
Boot yourself out of bed
The ultimate weight loss programme