It was a momentous event when William Tema discovered that he had shed 101.2kg whilst on The Weigh-Less Weight Maintenance Programme. William had battled being overweight and unhealthy his entire life and this lead him to make the life changing decision to join Weigh-Less. “For as long as I can remember, I have always had an above average appetite," William recalls. He has been on the programme for the past four years, and the once unhappy man now radiates with health, happiness and success.

Eating himself to death William recalls that his love affair with food began in his childhood and continued into adulthood. His father owned a fast food restaurant and this made unhealthy foods easily accessible to him. He reveals that he used his obesity as protective mechanism since people were intimidated by his size and wouldn’t readily mention his weight. He recalls not being worried about being overweight and didn’t realise the harmful consequences of his unhealthy lifestyle.

William described an incident when boarding a plane and he had to request a seat belt extension to fit around his girth. The passenger seated next to him began speaking about the health risks of being overweight. William says “I was shaken with anger and embarrassment about being confronted by the passenger about my weight.  Thereafter I tried a number of diets, none of which worked for me”.

His light bulb moment came when he had to be hospitalised for high blood pressure and painful ulcers on his legs due to his weight. Doctors warned him that he was eating himself into an early death, and recommended that he join The Weigh-Less Weight Maintenance Programme.

Discovery Vitality members receive a discounted membership fee at Weigh-Less, and William says “I had no excuses for not joining since I am a member of Discovery”. Weigh-Less offers members In-Group Support in which they attend weekly group meetings under the mentorship of a Group Leader and meet other Weigh-Less members who are trying to lose weight. Group Leaders are former Weigh-Less members who have successfully reached their Goal Weight, therefore they can offer empathy and appropriate support.

William describes feeling “extremely nervous before attending the weekly group meetings but was immediately put to ease by my Group Leader, Sonja Davids’ kind and understanding nature”. Members are provided with the Steps to Success filo which is comprised of an eating plan based on sound nutritional principles that cater for members’ needs. He recalls leaving his first group meeting feeling “informed and motivated to lose weight”.

William was strict with himself when sticking to his eating plan, and the results were remarkable. His perseverance paid off and he lost a whopping 101.2kg over a period of four years! He says: “I couldn’t fit into any of my large clothing anymore and my friends were constantly asking if I was working out with machines. I just laughed and told them that my secret was Weigh-Less and they should join too." 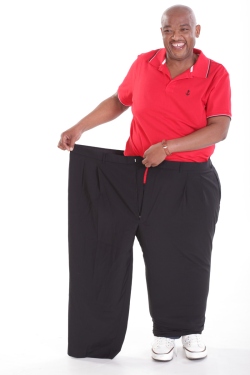 The physical effects on William’s body were undeniable, he describes how the ulcers on his legs began to heal, and he no longer required blood pressure medication. Shedding the excess weight has also been empowering for him.

“Being overweight left me feeling tired and slowed down my movements. Since losing weight, I don’t need to nap after lunch, and I feel energised enough to work late into the evening! I am also religious about going to the gym every day, and look forward to playing squash on Wednesdays," he says.

Weigh-Less Group Leader Sonja Davids has mentored William’s weight loss and has noticed his personal changes. “When William first joined my group; he wasn’t very outspoken and would try not to stand out from the other members. After his weight loss he has become positive, happy and eager to interact with others. He is also energetic and participates in The Aerobics Marathon hosted every month end, and he is diligent about going to the gym. I am astounded by his progress," she says.

Weigh-Less founder and Chairperson, Mary Holroyd, has maintained her Goal Weight for the last 41 years and is most impressed with William’s progress.

“Many years ago I identified that there is strength and support in numbers, surrounding yourself with the right people that so love you and want you to be happy. William found those special people in his family and his Group leader and Group and so can you," she says. "A 20kg weight loss in a month is a dream to many, but William started with the first week’s weight loss at 7.2 kg and never let go of his dream. William has transformed himself over the last 4 years, and discovered who he is! William I am so proud of you, you took you on and you won!”

William credits The Weigh-Less Weight Maintenance Programme for his weight loss achievement. "Through Weigh-Less, I have gained my life back and I am happier than ever! Now I attract like minded healthy people into my life."

When asked about moments of weakness, he admits that “he does have cravings for junk food occasionally  "but I remind myself of how far I have come and all my achievements, and the cravings disappear”. William credits Weigh-Less for helping him change his life around, and taking strides toward achieving a better life. He still has 15kg to go to achieve his Goal Weight, and with Weigh-Less behind him, offering him support, he will surely achieve this goal.