Why you may be struggling to lose weight 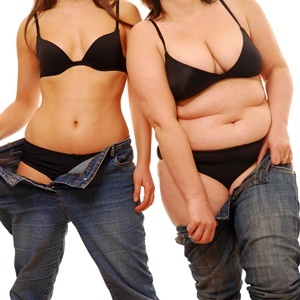 If you are one of those people that struggle to shed those extra kilos, you can take some solace from the latest research findings in the nutritional sciences: changes in body weight may be controlled not only by what you eat and how much you exercise, but also by your personal genetic makeup.

Read: How the obesity gene works

In the near future, experts may be able to customise an eating and exercise strategy that will work best for you by taking into account the specific genes contained in your DNA. Developed particularly with people who are overweight or obese in mind, this ‘precision weight loss’ approach will also benefit others who are looking to reign in their body mass index.

Your genes can influence your weight

In a review paper published in the medical journal Obesity, a group of US scientists have summarised the current state of genetic research in the field of weight loss. They highlight the fact that while lifestyle changes, including poor eating habits and a lack of exercise, have had a significant impact on the worldwide increase of obesity, the genetic makeup of individuals is increasingly recognised as a major factor.

Although further studies are needed to discover the exact relationship our DNA, environment and behavioural patterns have to conditions such as obesity and being overweight, current research suggests that approximately half of the changes in a person’s body mass index over time are due to genetic factors. The remainder is linked to things like exercise, diet and the state of the microorganisms in the digestive system.

So far, only a few specific genes that are associated with the regulation of body weight have been identified. Some of these cause energy from digested food to be preferentially stored as fat rather than being burned, while others affect an individual’s eating behaviour, making them prone to abnormally large appetites, overeating and a fondness for calorie-rich foods. Other genes appear to make physical activity less effective as a weight-loss measure, or reduce people’s ability to adhere to and sustain a regular exercise routine.

Until now, there have only been a limited number of clinical trials that have attempted to use knowledge of people’s unique genetic characteristics to design personalised weight loss interventions, but the authors of the review paper believe that the approach holds considerable promise.

“I think within five years, we'll see people start to use a combination of genetic, behavioural and other sophisticated data to develop individualised weight management plans," says lead author Molly Bray, a professor of nutritional sciences at the University of Texas at Austin.

To make this possible, the genetic profile of individual patients would be determined from saliva samples, while automated electronic sensors would be used to track their behaviour patterns and diet. The combined information would then be fed into computer programmes designed to provide specific dietary and exercise recommendations optimised to help individual patients to achieve their target weight.

Such precision weight loss programmes are not meant to diminish the responsibility people who are struggling to control their body weight bear for improving their condition. Instead, research indicates that a better understanding of the genetic factors may provide them with a new impetus to overcome these problems.

Read: Why some people don't get fat eating carbs

"When people hear that genes may be playing a role in their weight loss success, they don't say, 'Oh great, I just won't exercise anymore'," explains Bray. "They actually say 'Oh thank you. Finally someone acknowledges that it's harder work for me than it is for others.' And then I think they're a little more forgiving of themselves, and they're more motivated to make a change."