FitnessDoc looks at the physiological side of football and finds out what it takes to play a 90 minute game while making some interesting comparisons between rugby and football.


A football result is determined by the interaction of too many factors to even quantify (this is why coaches are paid big money - their job is to quantify and then optimise them).  Skill levels, strategy, opposition strategy, individual match-ups all contribute to the final result.  Each player has a (very) limited time to impact on the match and the margin between success and failure is impossibly small.

In this context, the physiology of football, especially with reference to fatigue becomes important.

If a player is 5% short of the level they need to be to complete a 90 minute match, given its demands, then that player may well concede the half-a-second, or the half-a-metre, to the opposition that leads to the game's decisive moment.

Winning and losing are literally separated by these margins, and so it will come as no surprise that a good deal of work has been done on the physical demand of the game, so that coaches know what physiological level players need to be at to avoid fatigue.

We kick off  with a look at that physiological demand, and actually ask -  just what goes into 90 minutes of elite football?

I could tell you the very simple version of the load, and cheat you out of a mass of data, by simply saying that on average, an elite football player plays for 90 minutes at about 70% VO2max, expends about 18kCal/minute, and covers between 10 and 15 km per match.

But this would be obscuring the real challenge, which is that the game comprises multiple sprints, jumps, changes in direction and ball interactions.  Let's look a little more closely at each match.

Below is a graphic that pulls together a number of studies that have looked at the activity profiles of footballers.  What I've done for comparison's sake is to include a similar profile for rugby, with backline players (green) and forwards (red) shown below the football (blue).

Just a word on how this data is actually collected - the most common method is a system of cameras in the stadium, at fixed locations, which track players in their recognised 'grids'.  Some advanced software, complex trigonometry and mathematical algorithms is then able to put together a 2-dimensional reconstruction of where that player has moved, and how fast.

Another method, used for the rugby data below, is GPS, where players wear a GPS unit that tracks where they move and how quickly they run, in the same manner as many of you reading this will use a Garmin to monitor your training (these units are much more expensive, however).

In all the subsequent graphs, I've opted to simplify as much as possible to illustrate the concepts. For example, the speeds of running are grouped into four categories - walking, jogging, high speed and sprinting - and these are somewhat arbitrary.  Those interested can look more closely at some of the studies in the bibliography at the end of the post.  So let's have a look at what they show (click to enlarge). 
So the first point is that a footballer covers between 10 and 15km in a match, but this is broken into various running speeds and walking speeds.  In 90 minutes, about an hour is spent standing or walking - that would account for approximately 3km of the distance.

Not surprisingly, more time is spent standing and walking in rugby, because the game is more "static" with less space as a function of the way it is played.

Soccer players also spend more time jogging, running at high speed and sprinting. A player can expect to cover approximately 5km in jogging, and nearly 3km in sprinting (> 20km/h in this case) in a match.  I must just point out that one of the limitations of these kinds of studies is that the camera system tracks the player and then measures the distance covered above a certain speed.

So for 8 minutes, a player is running at what is defined as sprinting.  However, that player may well have made a short, highly explosive run over 10m which didn't not get them up to these speeds, and these bursts are often not tracked in this analysis.  They are still "physiologically costly", however, and this is one reason why GPS is so appealing as the next step - it is able to track those accelerations.

We can still measure the number of times players sprint in matches, and it turns out that a footballer will make between 80 and 110 sprints in a match.


And therein lies the crux - 100 sprints in a match, and each one causes a progressive level of fatigue.  The question is how much rest do players get?
One can calculate a work:rest ratio, which in this case, I've worked out as the time spent doing higher speed running and faster jogging (faster than 12km/h), and compared it to the time spent walking, standing and jogging slowly.

In other words, for every 10 seconds that a footballer will exert themselves for, they will receive, on average, 20 seconds' rest. That rest may be accumulated in the form of 3 minutes worth of rest, while on other occasions, a player may receive almost no rest for a few minutes.

This is much lower than for rugby, where 10 seconds on is matched by 30 or 35 seconds off.  The crucial challenge, then, for footballers, is to train for these high intensity, short duration bouts, where acceleration and deceleration add significantly to the energy cost, and then to recover so that they can do it again some 30 seconds later!  Other analysis has shown that a footballer will make approximately 28 "purposeful movements" every 15 minutes - about 2 per minute.

These include turns, dribbles, accelerations, decelerations, tackles, passes and jumps.  A player makes about 550 turns a match, and must decelerate about 60 times.

It's little wonder that the energy cost is high, and given the work:rest ratio, you will not be surprised to learn of a relatively sizeable decline in speed with fatigue during a match.


Finally, the overall energy cost for football has been estimated at about 1400 kCal.  How does that compare?  Rugby is higher, about 15%, and that's because of the impacts in rugby, and the energy involved in 'static activities' in rugby, like scrumming, rucking, maul, tackling, cleaning etc.

However, the energy cost is high - 1 400kCal is roughly what a 70kg person would spend running a half-marathon (21km), so you get the idea that the energy demand is high.  That's thanks to those repeated sprints, changes in direction, explosive efforts over 5m. Finally, let's look also at football specific activities - the game is more than just running, after all!  To the right is a graphic comparing football to rugby, and it shows the following for football:


The number varies greatly by playing position, as it does for football, as I'll discuss below.

Now, the crucial component for a footballer is involvement with the ball.  I believe the matches are won through work OFF the ball, but of course, someone has to score, tackle and pass, and that involves the ball.

Below is a table from a paper by Bloomfield which summarises ball interactions. It shows that a player will interact with the ball between 90 and 140 times in a match.  There are some differences per position, but there were not statistically different.

The average time of interaction, not shown, is incredibly small.  Remember, the typical interaction is a one-touch pass, or a control-pass.  Players, especially at the elite level, will usually receive the ball with 1m to 5m of space between them and an opponent - half a second (or less) to execute a skill.  Therefore, a player usually has considerably less than a second on the ball.

On occasion, a player will control, dribble, and pass, and may then find themselves with the "luxury" of possession for a 'whole' 3 to 4 seconds.

What if I told you that on average, a player will have a total of between 60 and 90 seconds of ball time in the entire 90 minutes?  Amazingly, this is the time that a player has to swing the match.

One decisive through ball, one strike, one dribble and pass, but a total of about a minute in a 90 minute match.  It's no wonder that work off the ball becomes so important.  You can try this out when you watch a game.

Lastly, below is a map of the field, just highlighting some of the key differences between positions on the field, since I know you're probably wondering by now - I've oversimplified the above values into averages, so bear with me providing a more simple overview.

The figure below shows some of the key differences - there are others, but as I said, I don't want to make this more complex and voluminous than it already is: 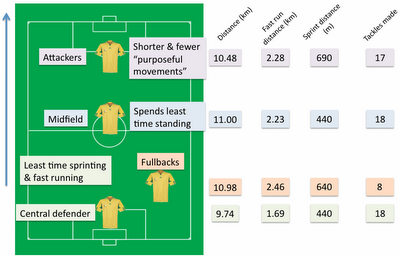 Fatigue - the stage is set

I have to emphasise that in all the categories looked at above, I'm presenting a relatively simplified overview of the game and its demands.  There are differences between teams, between players on teams (depending on their role, two midfielders can have completely different physiological profiles, for example) which are not accounted for here.

So in reading this, it's not meant as a fingerprint for every team, every player, every match, but rather a guide.  I hope it adds some insight as you watch the 2010 World Cup.  When we look at fatigue in the next post, I'll tackle some of that insight a bit more.

Dr Ross Tucker, is Health24’s FitnessDoc and has a Ph.D. in Exercise Physiology from the University of Cape Town and a Post-Graduate degree in Sports Management from the UCT's Faculty of Commerce. He is currently employed at the University of Cape Town and Sports Science Institute of South Africa, and works as a consultant to various sporting teams, including South African Sevens, Canoeing, Rowing and Triathlon SA. He also blogs on www.sportsscientists.com)

We live in a world where facts and fiction get blurred
In times of uncertainty you need journalism you can trust. For only R75 per month, you have access to a world of in-depth analyses, investigative journalism, top opinions and a range of features. Journalism strengthens democracy. Invest in the future today.
Subscribe to News24
Related Links
The formula for World Cup success
Next on Health24
Does coffee burn more fat during exercise? What the evidence tells us