The 6 common fitness tips that are actually bad advice Don't make these mistakes at the gym.

Bernard Yang Kim never wanted to be a bodybuilder. The 31-year-old currency trader simply wanted to look chiselled – like an underwear model, he jokes. Which is why he found it odd to be staring up at a 140kg barbell. He had never benched so much weight in his life; few men ever do.

But his usual trainer was out, and his gym had set him up with a substitute – one who, as it turns out, was not only overzealous but also a terrible spotter. “The bar crashed onto my chest, tearing my pectoral muscle,” says Kim, who ended up in hospital. “It was excruciating.”

Read more: These are the three best workout moves to injury-proof your body, according to a stuntman

While extreme, Kim’s experience is not uncommon. In 2014, there were roughly 15 000 personal trainers in South Africa, a number that has seen a steady growth over the years.

Indeed, personal training is one of the few professions to not only blossom during a recession but also grow afterwards as people turn to it for a second job and even a second career. And it’s easier than ever to get certified: You can go online, take a course and start training clients within a month.

“The problem is separating the accredited and qualified ones from the pretend ones,” says Scott Schreuder, chairman of Register of Exercise Professionals South Africa, a body that recognises certain qualifications and ensures exercise professionals meet the health and fitness industry standard.

“Using unqualified, unaccredited trainers is a no-win situation. At best, they will be ineffective and a complete waste of money. At worst, they can cause serious injury!”

Read more: 8 things you should know before hiring a personal trainer

“It’s a buyer-beware market,” says certified trainer Mike Boyle. “Getting hurt might be rare, but you can easily waste your time with someone who is ineffective at best and dangerous at worst.”

In short, knowing how to recognise bad advice is more critical than ever. Read on for six of the worst fitness tips we’ve ever heard, and six ways to get back on track.

“There’s this idea that you have to train to failure to trigger growth,” says Boyle. “But ‘go big or go home’ is a slogan for a meathead’s T-shirt and a prescription for injury, not an effective training strategy. The truth is precisely the opposite – ‘slow and steady wins the race’. ” Not convinced? Talk to Bernard Yang Kim. The key to success in the weight room is to make consistent, incremental gains that ultimately add up to the body you want.

Read more: The kettlebell is the ultimate tool to torch fat – here’s how to use it and perfect your form

Better move: Train to technical failure. “You want to do as many reps as you can with perfect form,” says Boyle. “Once you can’t do a perfect rep, the set is over – no negative reps, no spotter assistance, no using momentum to crank out one more.” When you can complete your goal reps for every set – three sets of 10, for example – you’re ready to move up in weight. “Throw another 2.5kg on the bar or grab the next heaviest pair of dumbbells,” says Boyle. “It might not sound like much, but think about it this way: Even if you only go up 2kg every two weeks, you’ll still add 60kg to your lift after a year.”

Bad advice #2: “Push through the pain”

A little bit of soreness isn’t a bad thing. It just means you’ve pushed your body harder than usual, causing micro tears in muscles that ultimately lead to gains in size and strength. “But there’s a big difference between soreness and pain, and ignoring pain is a ticket to the disabled list,” says Boyle.

“I regularly ask my clients, ‘Does the exercise make any of your joints hurt?’ I don’t care if the pain diminishes after they warm up – if they answer yes, that’s the end of the exercise.” 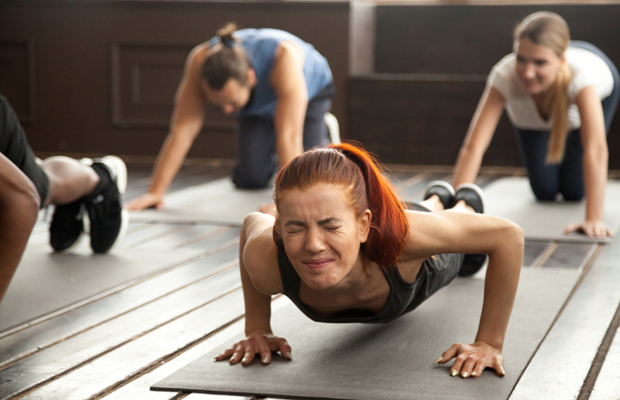 Read more: Here are 8 fit-fluencers you should follow on IGTV

Better move: Find a pain-free alternative that works the same muscles. “Just because the barbell bench press causes you shoulder pain doesn’t mean you have to stop working your chest,” says Boyle.

“Try using dumbbells, do incline presses or switch to push-ups.” Changing your grip, angle or movement pattern alters the load and positioning of your joints, allowing you to build muscle without breaking your body.

Bad advice #3: “Protect your spine with crunches and sit-ups”

There’s no denying that crunches and sit-ups can help you sculpt a six-pack, but they come with an inherent flaw: Repeated spinal flexion, which can increase your risk of developing a back problem and can also aggravate existing damage. Bottom line: By recommending crunches and sit-ups, some trainers facilitate the very injuries they’re trying to prevent, says Tony Gentilcore, qualified trainer at Cressey Performance.

Read more: Learn these 3 surprising facts about your core to get rock hard abs

Better move: Do stability exercises. “Stability, or resisting unwanted motion, is the true function of your core, and exercises that reinforce that function protect your spine,” says Gentilcore.

Try the stability ball rollout: Sit on your knees in front of a stability ball and place your forearms and fists on the ball. Slowly roll the ball forward, straightening your arms and extending your body as far as you can without allowing your lower back to “collapse”. Use your abdominal muscles to pull the ball back to the starting position.

“We’re starting to see a lot of people getting thrown into an extreme group workout with little instruction, and then doing high reps of very technical lifts as fast as they can,” says Chris Bathke, owner of Elemental Fitness Lab. “Even athletes don’t do that.” When speed is your main focus, you lose sight of form and that can lead to injury – especially if you’re doing heavy Olympic lifts or powerlifting moves like cleans, snatches and dead lifts.

“I’ve asked people to show me an exercise that in a previous workout they repeated for time,” says Tyler Smith, a physical therapist and a member of the elite athletic development society known as GAIN. “They’ll demonstrate a horrible squat, and they did 30 of them.”

Read more: 10 deadlifts you can do with just a pair dumbbells

Better move: Focus on form, not speed, and start with body-weight versions of exercises until you master them. In big lifts like those we just mentioned, it’s critical that you brace your core and maintain a slightly arched or flat back. If you don’t, your spine can pay the price. And keep your body language to a minimum; jerky movements that boost momentum can do more harm than good.

This misguided mantra is the call to arms of many extreme-fitness programmes, and it can be disastrous in practice. The reason: Lifting heavy weights recruits fast-twitch muscle fibres, which generate more force but also fatigue faster. If muscles don’t have enough time to recover between sets, you won’t be able to train them fully, slowing your gains and increasing your risk of injury. “Making somebody tired is easy,” says Sal Marinello, president of Athletic Development Coaching in New Jersey. “But there’s a difference between tiring someone out and actually improving their physical condition.”

Read more: Why you should ditch weight training and build old school muscle

Better move: “Understand that a 45-second break is a 45-second break,” says Jonathan Goodman, founder of the Personal Trainer Development Centre, an online resource for personal trainers. As a general rule, the lower your reps and the heavier the weight, the longer you should rest a muscle group before working it again.

If you’re doing sets of one to three reps, rest three to five minutes. For sets of four to seven reps, rest two to three minutes. For eight to 12 reps, rest one to two minutes. Rest no more than a minute for any number of reps above 12. That doesn’t mean you can’t work opposing muscle groups, like quads and hamstrings, back-to-back. (Think supersets and circuits.)

High-impact plyometric exercises, such as box jumps (leaping on and off a box or bench) and depth jumps (stepping off a bench and then springing off the floor and landing on a platform) are favourites of many trainers trying to help clients build explosive speed and a killer jump shot. But these drills can also hammer your joints – especially if you’re heavier than you should be.

“I once had a client who was 18 to 22kg overweight come in complaining of knee pain,” says Mike Robertson, co-owner of Fitness and Sports Training. “The reason was that the previous trainer had this person doing jumps – something most fit people shouldn’t even do.” Read more: Fitness tips and other lessons from our previous cover guy finalists

Better move: If you’re already fit, jump onto a 30 to 50cm box with both feet, and then step off one foot at a time. That gives you the explosive benefits of the exercise without destroying your knees. Better still – especially if you’re carrying extra weight – swap jumps for less jarring exercises that use similar movement patterns. “The kettlebell swing is a perfect substitute,” says Robertson. “It trains the same hip-hinge pattern without the high impact consequences.”