How you can gym for free in Johannesburg!

From London to Diepsloot, the number of outdoor gyms in city parks in on the rise. Opened this past weekend, the Phiri Park outdoor gym is one of at least 12 outdoor gyms in Johannesburg spread from Newtown in the city’s central business district to Eldorado Park west of the city.

According to Johannesburg City Parks Department Managing Director Bulumko Nelana, the parks are the outcome of community consultations in which residents said they wanted Johannesburg to be a “liveable city that encouraged family-friendly recreation”.

The parks also provide free access to exercise equipment to many who would not otherwise afford pricey gym memberships, said Nelana in a statement. The city hopes that the parks will help combat rising rates of non-communicable diseases (NCDs) among South Africans.

Read: Belly or hip fat? All in the genes

As of 2012, outdoor gyms were slated for 20 parks across Johannesburg including those in Alexandra, Hillbrow and Lenasia.

According to the parks department, many facilities like that in Diepslooot Park are packed during peak hours. The department adds that dedicated security personnel at each facility also double as fitness trainers.

We take a look at how the latest outdoor gym in Phiri Park got Sowetans moving this weekend. Amelia Mncube, 46, is a Phiri resident and says she is looking forward to working off some extra weight at the new park: “Some of us don’t have money for gym. I need to burn fat. This outdoor gym will be very helpful.” Mncube also attends regular aerobics sessions at Phiri Hall. (Image: Itumeleng Tau/Health-e News) Marathon runner 49-year-old Floyd Mhlongo came to test out the new fitness equipment from nearby Rockville and is happy to have a gym nearby. (Image: Itumeleng Tau/Health-e News) 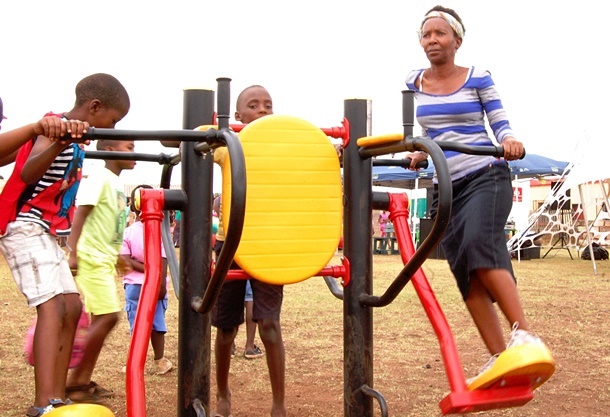 Local aerobics instructor Vincent Masobe shows 15-year-old Ntokozo Zulu how to use new equipment in the park. Zulu says he usually trains at a gym in Kliptown, which is far from his home. Zulu says he is excited to have a new place to train nearby. (Image: Itumeleng Tau/Health-e News) Lindokuhle Hlongwane, 10, gets active on one of the stationary bikes in the new Phiri Park outdoor gym. Hlongwane says the new gym has inspired him to get fit: “I usually don’t exercise but I am going to start exercising regularly.” (Image: Itumeleng Tau/Health-e News)

How to gently start an exercise regime

What's keeping you from achieving your dream body?

We live in a world where facts and fiction get blurred
In times of uncertainty you need journalism you can trust. For only R75 per month, you have access to a world of in-depth analyses, investigative journalism, top opinions and a range of features. Journalism strengthens democracy. Invest in the future today.
Subscribe to News24
Related Links
10 things pole dancing can do for you
How easy is it to get steroids in South Africa?
Next on Health24
Not keen on working out? It might be your personality