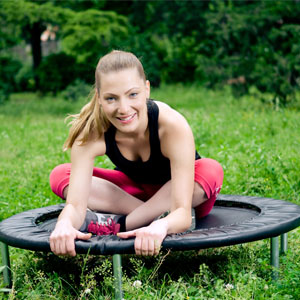 Trampolining, said to have begun when Eskimos bounced each other on walrus skins for the fun of it, is putting a feel-good cardiovascular spring into group fitness classes, from body sculpting to dance, fitness experts say.

Also known as rebounding, it delivers a low-impact, calorie-burning workout that swaps the tedium of a treadmill or step class for a feeling of child-like euphoria.

"I wanted to do something fun. Everybody likes to climb as kids, everybody loves the bounce of the trampoline," said Byron Knox, a director and instructor at the Stamford-based facility.

Knox compared it to working a leg press followed by using upper body equipment, but said it is more entertaining.

"Most people wouldn't think of trampoline as a workout but it takes a lot of energy," he said. "It could be equal (in cardiovascular intensity) to jumping rope. And part of the beauty is that the exerciser is in control."

The more flexible can jump and split-jump higher, but Knox said just about anybody can participate, and trampolining also enhances balance and spatial awareness.

At Chelsea Piers Connecticut the "tramp" precedes the rock wall.

"That part takes a bit more coaxing," Knox admits, although everyone is harnessed and spotted.

At JumpLife studio in New York City, some 25 mini-trampolines connect with low lights and top 100 songs to draw out the inner dancer.

"Jump Dance is our signature class," said founder and CEO Montserrat Markou, of the 45-minute non-stop cardio workout, which she said can burn up to 600 calories.

She said the class doubles as a venue for bachelorette parties and girls' nights out.

Another class, called Jump Gym, ditches the dance club vibe and incorporates weights and push-ups into the trampoline workout.

"Jump Gym attracts more men," said Markou, whose mini-trampolines are equipped with a handlebar that can be grabbed should balance fail.

"People can work out who couldn't work out before," said Markou, who hopes to draw in seniors and children.

Gentler on the body

"It's a bit more gentle on the body, more rehabilitative," said Johnson, who's been rebounding for about 10 years.

Jessica Matthews, an exercise physiologist with the American Council on Exercise, said trampolining is a joint-friendly way to add the cardiovascular component to a group fitness workout.

The intensity, she said, can vary from a brisk walk to a run.

She said the National Aeronautics and Space Administration has used trampolines to build bone density in astronauts.

Matthews cautions that while the impact is low, the surface of a trampoline is still unstable and cautioned that people who have lower-extremity instability must be aware of this.

She said people also combine it with other activities.

"Some do it while watching TV," she added.

Picture of Trampoline from Shutterstock

We live in a world where facts and fiction get blurred
In times of uncertainty you need journalism you can trust. For 14 free days, you can have access to a world of in-depth analyses, investigative journalism, top opinions and a range of features. Journalism strengthens democracy. Invest in the future today. Thereafter you will be billed R75 per month. You can cancel anytime and if you cancel within 14 days you won't be billed.
Subscribe to News24
Related Links
Trampoline dangers
Description of gymnastics
Next on Health24
Can’t manage workouts during the week? Don't worry, exercise only on weekends is also effective